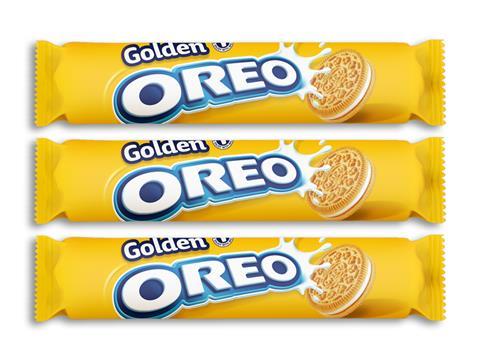 Why: Despite a decline in everyday biscuit consumption, with £25.7m wiped off the sub-category’s value in 2016 [Kantar Worldpanel 52 w/e 9 October 2016], American giant Oreo gained £11.8m in UK sales last year, nearly £3m more than the next biggest-growing biscuit brand, BelVita [Nielsen 52 w/e 10 September 2016]. This product was one of Oreo’s first flavour variant launched in the British market.

Consumer verdict: While the brand was instantly recognisable from the “bright and colourful” packaging, 87% of our testers said the product offered something new and different to the sweet biscuit category. After tasting, around half of consumers rated the texture and taste as “excellent”, with others describing it as “smooth” and “creamy”. More than 40% claimed they would definitely buy. The competitive price point of Golden Oreo also influenced our triallists’ purchasing decisions, with many considering the pack good value for money, and 76% saying they would buy at least monthly.