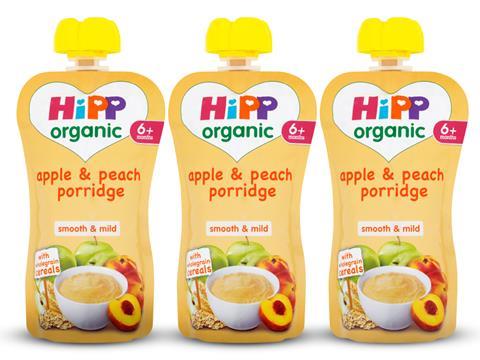 Why: Hipp Organic extended its baby breakfast portfolio in June with two new ranges including ‘porridge pouches’ - which the brand claimed as a first in a category that has seen most brands adopting pouch formats to replace jars. Heinz, for example, launched pouches for babies in 2015 in an effort to stymie a 13.6% decline in sales. This Hipp product is one of three variants in a porridge line-up that also includes pear, apple & apricot and ‘fruity’.

Consumer verdict: The product was tested by families with babies aged six months-plus, and was regarded as “handy to have around” as a quick breakfast or a convenient snack, with almost two thirds saying they would buy it at least fortnightly. Some consumers said the porridge was “expensive”, but more than half would recommend it to a friend and many parents claimed their babies enjoyed it. Overall, the product scored 14 points above the category norm - a new maximum.