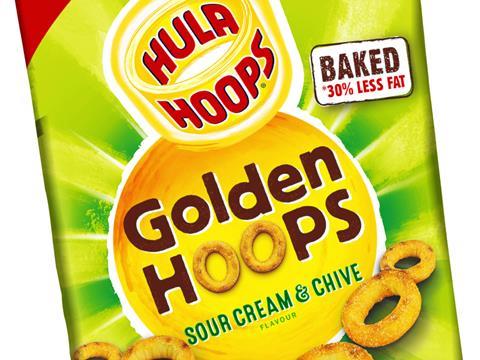 Why: While fried potato crisps are not in quite as poor a state as is sometimes held, alternative savoury snacks continue to prove popular. Golden Hoops were launched in as a baked equivalent of Hula Hoops Puft, promising 30% less fat than regular crisps. Designed to tap the trend for permissible snacking, they come in a multipack of six in cheese, salt & vinegar and sour cream & chive variants, and in a cheese grab bag.

Consumer verdict: There was strong interest in the product from the start. Both the brightly coloured pack and flavour appealed to our shoppers, who saw the snack as an unusual addition to its category. Enthusiasm increased upon testing, with praise for the “lovely flavour”, “crunchy texture”, “strong aftertaste” and “good value”. There was criticism for the product’s small pack size and appearance - “like onion rings at a glance” - but it would be a regular purchase by the majority of our consumers, and one “handy” for children and adults alike.