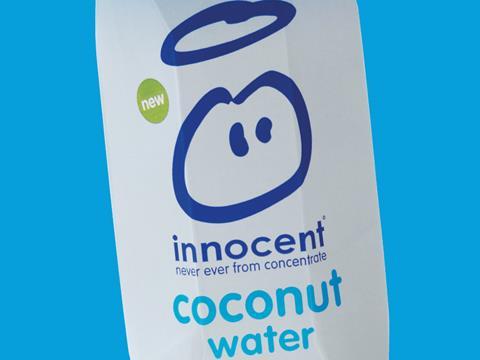 Why: Innocent this year joined the burgeoning coconut water market, which has risen 72% year on year [Nielsen 4 w/e 15 June 2015). It claims more than two thirds of its sales have been incremental to the category, and that its brand has taken a 22% market share after just 12 weeks on shelf.

Consumer verdict: Coconut water, while growing, remains a niche market and this is reflected in the low overall score achieved by Innocent’s drink, which was similar to the score given to coconut water previously tested by Cambridge Market Research. Innocent’s water proved to be an acquired taste, with the majority dismissing it as a little strange. Some testers went as far as to say it tasted “unpleasant”, though it was in fact similar to other coconut waters with a slightly earthy aftertaste and mild flavour. One in four respondents rated the taste as good or excellent and considered it at least an occasional purchase, with buying intent strongest among 18 to 34-year-olds. The low fat content and ‘feelgood’ benefits mean this has potential beyond its current niche.

Better than what’s out there:19%