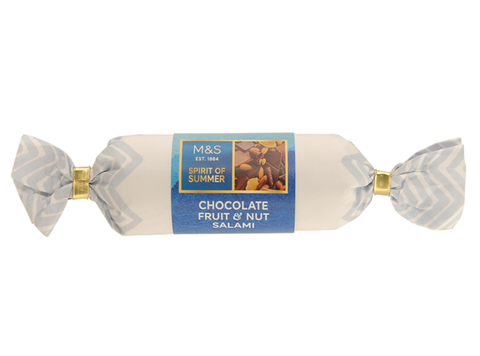 Why: With confectionery still under pressure from the health agenda, suppliers have to be increasingly novel with their NPD in an effort to stay relevant. This salami-shaped bar from M&S is milk and dark chocolate praline with nuts and candied orange peel. It sits in a sub-sector, slabs with added extras, that lost 5% in take-home value sales over the past year [Kantar Worldpanel 52 w/e 18 June 2017] - but, to its advantage, it taps trends for sharing formats and the mixing of sweet with savoury (albeit in appearance rather than taste).

Consumer verdict: The format and “funky and modern” packaging piqued some shoppers’ curiosity ahead of trial - though others were less impressed. The premium price point also stymied greater pre-trial interest. In the north, our consumers described the chocolate as “delicious and lush”, while people in other regions claimed it was “too rich and sickly” with “two much powder around it”. However, the price was the main cause for concern, limiting frequency of purchase.