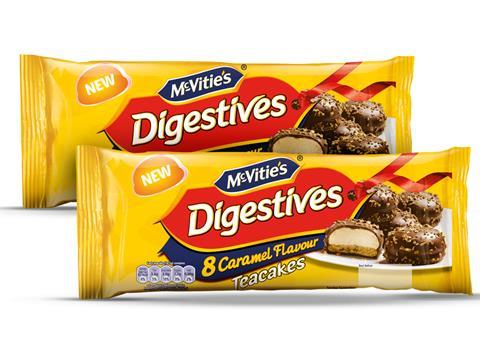 Where: Individual cakes and pastries

Why: United Biscuits is hoping to take a slice of Tunnock’s share of the teacake sector with its McVitie’s branded duo, introduced in two flavours - Digestives Caramel and Hobnobs Milk Chocolate. This variant combines the original biscuit with soft marshmallow layered with chocolate and topped with caramel-flavoured pieces.

Consumer verdict: The bold packaging encouraged a good level of pre-trial interest: more than half of our panel considered it new and different. There was, however, a clear divide between the South - where it was described as having a”lack of caramel and mallow” with an “unpleasant and sticky” texture - and the North and Midlands, where it was described as “delicious” with “fluffy marshmallow”. Purchase intent decreased from 53% pre-trial to 42% post trial. The product was seen as more of an occasional purchase as a weekend treat, though a fifth of panellists claimed they would purchase at least once a fortnight.