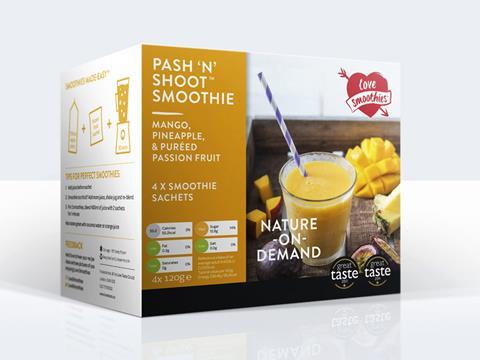 Why: This frozen smoothie brand was co-developed by chefs Stefan Cosser and Dominic Chapman. Each variant comes as pack of four 120g sachets containing a mix of frozen fruit and vegetable pieces and purée, which must be blended with apple juice or coconut water. The brand has worked with sports nutritionists to ensure its smoothies are suitable for athletes. This flavour - a blend of passion fruit, mango & pineapple - was launched alongside two others: Broccoli & The Beast; and Red, White & Blueberry.

Consumer verdict: There was a good level of pre-trial interest among our panellists, and the smoothie met the expectations of many. A few consumers had apprehensions about the “lumpy” texture, but the majority said it was easy to prepare and resulted in a “refreshing” drink that was “thick and fruity” and perceived as healthy. Price was a concern for some, but the product was still considered a viable option as a weekend treat.