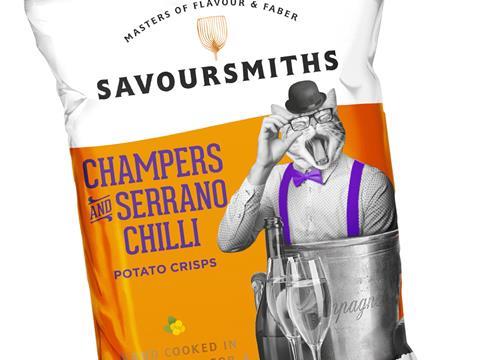 Why: Potato supplier Russell Smith Farms entered the bagged snacks category last autumn with Savoursmiths: skin-on crisps with “decadent ingredients from across the globe”. The brand recently secured listings with Waitrose, with potato crisps’ overall take-home value share down 2.9% [Kantar Worldpanel 52 w/e 29 January 2017]. However, sharing formats like this one have enjoyed a 3.5% boost as more shoppers, especially younger ones, opt to socialise at home.

Consumer verdict: Our consumers admired the “glitzy” pack design that was likely to “grab your attention”. The crisps were described as being “a good size” but the chilli was “too spicy” for some. Others claimed it overpowered the champagne flavour. Northerners and younger testers were more appreciative of the product, calling it “very nice”. While praised for innovation, the snack’s overall score was slightly lower than the category norm, largely due to the premium price point.