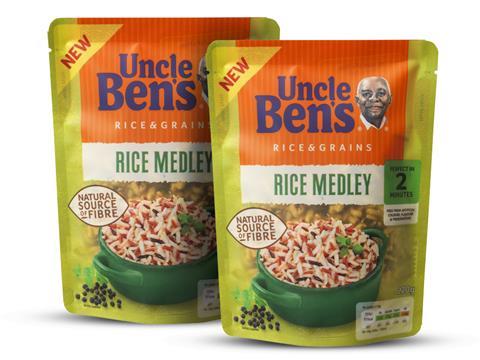 Why: Pouched is the only part of the rice & noodles category that has seen significant growth this year, with Brits forking out an extra £9.4m on the convenience product [Kantar Worldpanel 52 w/e 24 April 2016]. That’s good news for this Uncle Ben offering, which is part of the brand’s Rice & Grains microwaveable ‘express’ selection. In August, three new variants joined the lineup: 3 Wholegrain Bean & Chilli; Wholegrain Quinoa Soy & Ginger; and Wholegrain & Quinoa Savoury Chicken.

Consumer verdict: The easily recognisable pack stood out on shelf, though some of our testers considered it the “same old Uncle Ben’s packaging”. However, more consumers were impressed with the product than were disappointed. Triallists said the rice was “easy to cook” with “lots of flavour”. More than 50% of consumers said it would be it a good larder standby. But this variant was not considered to be particularly innovative compared with others in the range, with one quarter of shoppers saying the product was not for them.