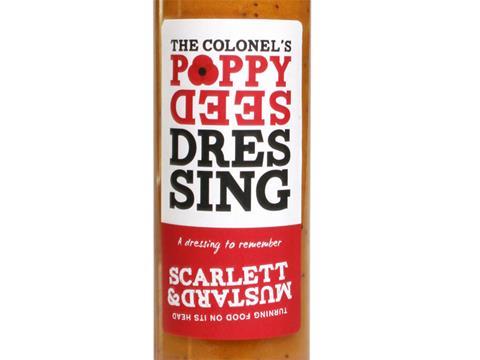 The Poppy Seed Dressing is made by Scarlett & Mustard

Scarlett & Mustard is launching a limited-edition poppy seed dressing that will raise funds for The Royal British Legion Poppy Appeal.

For each jar of The Colonel’s Poppy Seed Dressing it sells (rsp: £3.99), the Suffolk business will donate £1 to the appeal. The dressing - a citrus vinaigrette with poppy seeds will be available from June until November.

Scarlett & Mustard supplies dressings to independent retailers and last month won its first supermarket listing, with Booths taking a new range of four fruit curds that will also be stocked by 25 National Trust shops from next month.

After raising £150,000 in private investment, the company plans to add new ranges in 2015. It recently secured a £20,000 grant from New Anglia Local Enterprise Partnership that has allowed it to outsource production and take on new staff.