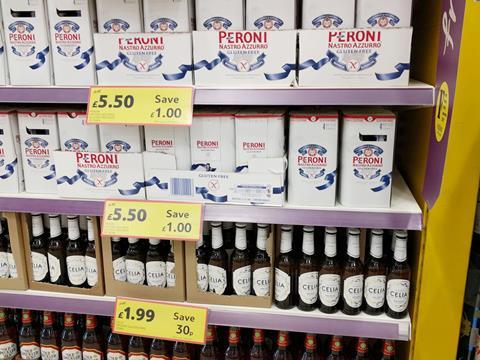 Tesco has gone all-out on gluten-free beer, rolling out full fixtures of free-from brews across 320 stores.

In stores that have not received a fixture, Tesco has boosted the presence of gluten-free beers by ranging in the general free-from segment.

Tesco was “pleased to offer customers a range of gluten-free beers in all of our stores”, having seen “strong growth” across gluten-free, particularly in BWS, said a spokeswoman for the retailer.

Tesco has also added two new beers. Meantime Gluten Free Pale Ale, brewed as an exclusive for the supermarket, has rolled into 374 stores in 330ml bottles, as has Old Speckled Hen Gluten Free, in a 500ml bottle and a 6x500ml multipack.

“We’ve spent time perfecting the recipe to ensure there is no compromise on quality or flavour,” said Meantime sales director John Tollfree. “That major retailers like Tesco are embracing gluten-free beer in such a significant way is really positive.”

Despite accounting for just 0.1% of the total beer market, value sales of gluten-free beer were up 81% to £5.8m in the past year [Nielsen 52 w/e 12 August 2017]. Its performance was boosted by recent NPD, said Nielsen analytics team leader Jon Sheppard. Carlsberg this month rolled out a new gluten-free variant of San Miguel into Tesco, and Molson Coors brand Cobra is to launch a new gluten-free version of its lager in January. However, Sheppard added: “As it’s from a very small base, this niche isn’t contributing a large amount of growth to the overall beer sector - £2.6m compared to £161m for all beer.”

Although the 12 weeks to 12 August had seen gluten-free beer double its share to 0.2%, it was “expected to remain small as less than 1% of the population are coeliac” he added.