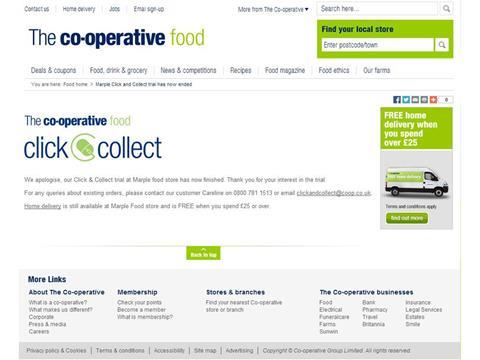 The Co-operative Group has finished its one-store grocery click & collect trial but denied suggestions it had ended it prematurely.

The society started the trial, for Co-op staff only, at its Marple store, near Stockport, at the end of November and extended it to Co-op Group members living near the store in February.

However, a message on the site www.co-opclickandcollect.co.uk now reads: “We apologise, our click & collect trial at Marple food store has now finished.”

Members who were invited to take part in the trial received invites with vouchers for £10 off their first £30 shop on the site that were valid until 7 April.

“We have been trialling click & collect alongside our work on rejuvenating our estate,” a Co-op spokeswoman said. “The trial ended on Sunday, having been extended beyond the initial three-month trial period, and has provided rich insight which we will use to inform our thinking on this channel going forward.”

The Co-op added that its focus in the short to medium term was on improving its store estate and providing a “step-change offer for our 12 million customers”.