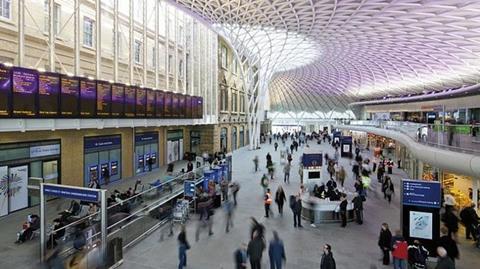 Network Rail has reported a 3.7% rise in retail sales at its 18 managed stations in the final three months of 2016.

Like-for-like sales rose to nearly £185m from October to December, an equivalent of £1,400 being spent every minute.

Manchester Piccadilly saw the largest surge in growth at 21.6%, with sales at King’s Cross rising by 15.9%.

The rail operator said the figures suggested a growing trend towards station hubs being seen as places to meet, eat, shop and travel.

Total sales at station retailers reached almost £743m from January to December, up 3.5% from 2015.

“Our commitment to improving the retail offer across our portfolio means that station users have more choice than ever before, from mainstays such as coffee and food on the go, right through to high-end fashion and gifting,” added Biggs.

Some 65.8 million people visited a station retailer over the same period, according to Network Rail.

“Consumers continue to move towards convenience shopping and stations are becoming an increasingly significant part of this change,” said Biggs.