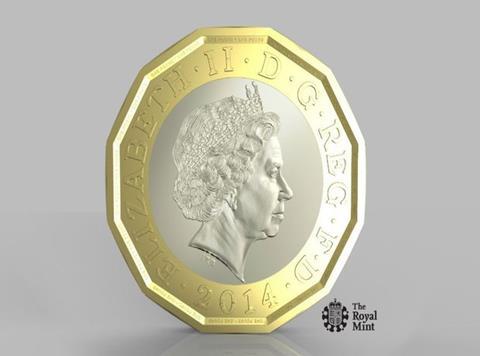 Retailers need to be prepared for the new-look £1 coin

Independent retailers have not been given enough guidance on the new £1 coin, according to the Association of Convenience Stores.

The ACS has warned the introduction of the new £1 coin in March next year would be a source of confusion and disruption to retailers if the government failed to communicate the changes properly.

The new £1 coin, which is less vulnerable to counterfeiters, will replace the current coin, which has been in circulation for 30 years. Levels of counterfeit £1 coins have been as high as 3% in recent years, equating to around 45 million coins.

“It is important that retailers are given long enough to prepare for any change in currency, as not having the correct information or lead time to adapt their in-store equipment could lead to delays and confusion in stores,” said ACS chief executive James Lowman.

“When the polymer £5 was introduced earlier this year, only 63% of convenience retailers were prepared for the transition, so it’s essential the government has a strategy in place to communicate the changes to the £1 coin effectively.”

The government has set up http://www.thenewpoundcoin.com/ to prepare retailers for the transition.