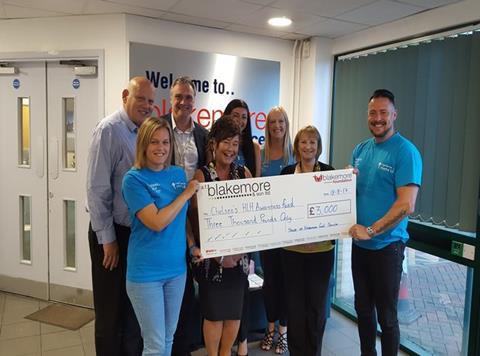 Blakemore Foodservice has donated £6,000 over the past year to its chosen charities.

Staff dressed up as Disney characters, hosted a Queen’s tea party, cooked up a BBQ and baked cakes as part of in-depot fundraising.

Others ran the Wolverhampton Half Marathon, climbed Snowdonia’s Tryfan mountain, and took part in a 12-mile health challenge walk.

The £3,000 given to the Midlands Air Ambulance Charity will fund the operation of three air ambulances, while the £3,000 donated to Chelsea’s HLH Awareness Fund will raise the profile of histiocytic disorders caused by the overproduction of white blood cells.

“Colleagues at Blakemore Foodservice’s James Bridge depot are very proud to be part of an organisation that puts social responsibility high on the agenda,” said Blakemore foodservice community champion Sharon Garner. “All of our fundraising efforts were match-funded by the Blakemore Foundation, the company’s charitable trust.”

She added: “Thank you to all staff who helped us to raise £6,000. While many of the fundraising efforts involved lighthearted fun, their impact extends so much further, helping to save lives.”