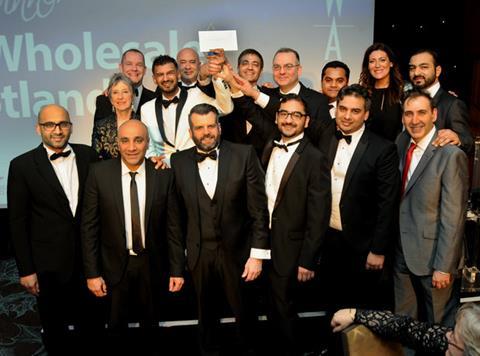 United Wholesale Scotland walked away with half the titles at the Scottish Wholesale Achievers awards.

Alongside the Champion of Champions Award, United Wholesale Scotland won Best Symbol Group for Day-Today, Best Licensed Operation and Best Marketing Initiative for the advertising and promotion of its revamped M9 Cash & Carry.

“While scoring within a number of the categories was very close, there is a clear winner of Champion of Champions this year,” said Simon Harrison, Cott sales director of wholesale and out of home, as he presented the award.

“This wholesaler achieves consistently high standards, and it has won four of the eight categories outright, making the decision-making process relatively straightforward.”

“Recognising and promoting best practice is our aim and Achievers does this with integrity - I am proud of this and I am also proud of the way Achievers has evolved because every year we act on constructive criticism to ensure that the awards remain meaningful and beneficial to all involved,” said Scottish Wholesale Association executive director Kate Salmon.