How Eat 17 is breaking the mould in convenience 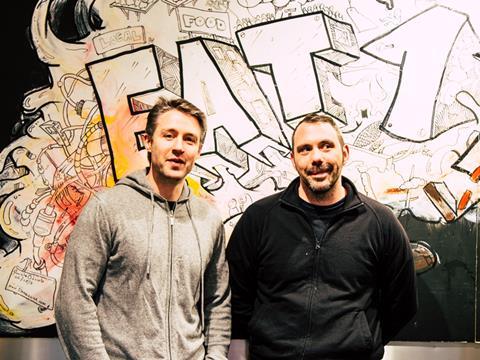 Despite just having opened their fifth store, with another to come later in the year, step brothers James Brundle (right) and Chris O’Connor defy the notion of their group of independent shops as a chain

Sleeping in a van while fixing up an off licence that hadn’t seen a “lick of paint since the 70s”. It was a humble beginning for the duo behind premium food retailer Eat 17. But 13 years down the line, step brothers James Brundle and Chris O’Connor have just opened their fifth store in London and the south east, with a sixth to open later in the year. But O’Connor struggles to think of Eat 17 as a chain. “We don’t see ourselves as a chain because each store has its own USP with a unique dining experience. We try not to have the cookie cutter approach. In Walthamstow people queue for the freshly piped doughnuts, for instance, and a local independent cinema rents out the upstairs of the Hackney site.”

The latest store in Hammersmith, which opened last week, is no exception. “We’ve decided to work with small independent street food sellers to bring that edge to this site.” Alongside vendors selling wood-fired pizza, mouth-watering burgers and Pakistani street treats, O’Connor says they are also hoping to sign up West London yoga studio Fierce Grace to use the mezzanine upstairs. “We wanted something that could contribute to our little ecosystem here and that would bring people in rather than being used as offices or unnecessary storage.”

Refillable stations also take centre stage in the 5,000 sq ft convenience store, with 100 lines including gluten-free penne, chia seeds and goji berries. There’s even refillable wine and beer stations. “It’s something we’re rolling out in all our stores and paying more attention to moving forward. We’re really trying to cut back on plastic use and have swapped our plastic cups and straws for paper alternatives.”

For its new store in Leytonstone, opening in October, it will be introducing refillable milk stations as well. “We’re working with Tom Parker Creamery to be the first in the UK to feature these. The milk will be fresh seven days a week and as soon as we know it’s working we can install these in all of our stores.”

Now on track to achieve a £10m turnover this year, the food and restaurant chain is a far cry from its “rundown” Walthamstow site in 2005. “We found the site and fell in love with it but didn’t have the budget to do anything to it. We just cleaned it and put an oven in the back. We went to Borough Market every day and started working with lots of small independent suppliers. The price point was high but we kept the profit margins small to be able to offer the products to our customers.”

Though this ethos hasn’t changed, Eat 17 is now offering bigger brands alongside local products thanks to its symbol agreement with Spar. “About five years after opening Spar backed us to be able to renovate the store and invest in new equipment to make it more attractive to customers. They helped us to expand and co-invested in our Hackney store. We now source all our everyday products from Spar and they allow us to create our own products.” One of which is Bacon Jam. The onion marmalade and bacon blend is now stocked in “quite a number of supermarkets and delis”, but like Eat 17 itself it started out humbly in the Walthamstow store with handwritten labels. “We put it out on the shelves and over that first weekend we sold 100 jars. It snowballed from there. People were half disgusted by the name but also intrigued, it had shock value.”

A range of condiments, including new Chinese Bacon Jam, now add to the 50-strong line of Eat 17’s own-brand products. “We’re putting our stamp on everything, as long as it’s a good quality product. We also have our own ready meals. That range has been growing over the last year, and we’re looking to develop more vegan and vegetarian options.”

Though the to-do list is already a mile long, Eat 17 is also working on providing a delivery service. “We’re currently building our online database of products and we’re nearly in a position to offer delivery to our customers.” But after the Leytonstone store opens, O’Connor says the duo will be taking a much-deserved break. “We’re going to consolidate and consider our options. We’re still a small company and we want to make sure the group is solid. We don’t want to put too much strain on it. But if the new stores go in the right direction we’re in a good position to expand again.” So much for taking a break.