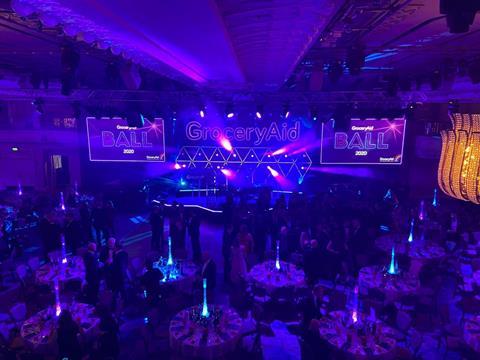 More than 160 companies from across the industry attended the event

This year’s GroceryAid Ball has raised a record-breaking amount for the charity, to be used to support thousands of colleagues in need.

Charles Wilson, Booker CEO and GroceryAid president, kicked off the event. He told those in attendance: “Last year, GroceryAid helped over 15,700 people through the helpline, from factories, wholesale, retail - all parts of our grocery trade.”

He added: “We recently awarded the GroceryAid awards to many companies in attendance tonight. With 49 gold, 35 silver and 52 bronze trophies, a huge thanks and congratulations to all award winners.”

GroceryAid then went on to show its ‘Martin’s Story’ case study film.

GroceryAid CEO Steve Barnes said: “We did something tonight that we had never done before: one of our beneficiaries volunteered to tell his story in front of over 1,000 industry colleagues. Martin gripped the room and his story resonated with some of the most important people in our industry and for us, I think it will lead to a real step-change on how we are perceived as an organisation.”

Patrick Kielty acted as the host for the evening, with entertainment coming from pianist Tokio Myers, pop band McFly and a DJ set from radio and TV personality Jo Whiley.