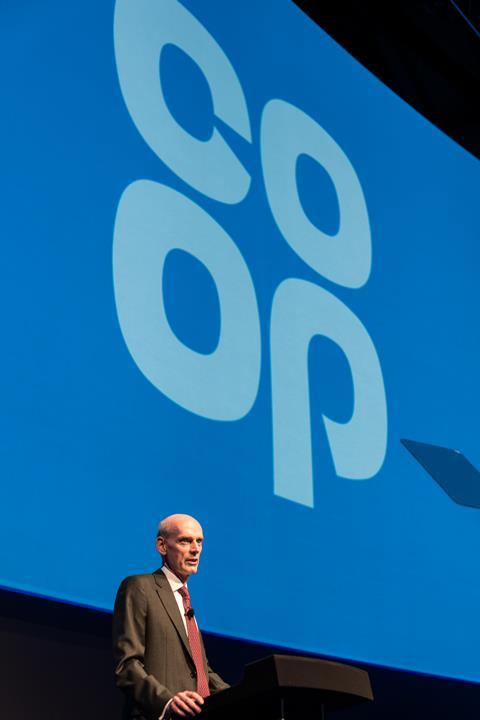 The Co-operative Group is going back to its ‘caring, sharing’ roots by reviving its classic blue logo and announcing a major new membership benefits drive worth £100m a year.

The initiative and the new/old blue leaf clover logo, which dates back to 1968, were unveiled at the Co-op’s AGM in Manchester today and are part of efforts to bring the Co-operative “back to being Co-op” again after scandals and poor performance in recent years.

As predicted by The Grocer in December, the group will change its name from The Co-operative Group to The Co-op. Meanwhile, the classic blue logo will be rolled out across the entire 3,750-strong Co-op estate, including 2,800 food stores, with the first seven stores trading in new colours from Monday.

From this week, all 70,000 staff will have new blue fleeces as part of their uniform, till receipts and bags will carry the new logo and 632 products including eggs, milk, bread and many own-label meals will have the new design.

Co-op CEO of food Steve Murrells said lorries would begin to be seen with the colours and logo this week, and 500 stores would be rebranded by the end of the year. The rest of the estate is expected to be completed over the coming three years.

At the same time, The Co-op will be running a ‘Back to Being Co-op’ programme for its 70,000 staff to educate them on the Co-op ethos and the new benefits for members that are being rolled out.

These include giving members a 5% reward for purchases of Co-op own-label products and service, with a further 1% going to local causes. The society said the benefits of this ‘sharing our success’ drive, which kicks off in the autumn, would amount to £100m a year by 2018.

The pay-out will be in addition to a Co-op dividend, the Divi, which the group plans to return to at the end of its current ‘rebuild’ phase, in another 18 months’ time.

The Group launched its latest step towards recovery from its near fatal 2013 financial crisis while reminding the 750-strong audience of members and colleagues of its beginnings with the Rochdale Pioneers of 1844, when ‘Being Co-op’ made it different and ‘the Divi’ became part of everyday language.

“That was our strength in the past and it will be again,” Murrells said.

Back to being Co-op

Group executive director Richard Pennycook said the mutual had asked itself how the Pioneers would have responded to the situation it found itself in now, when only half of its 8.5m cardholders used their cards and only half of those had spent the minimum of £250 in a year needed to register to vote at the AGM.

“You know, I have never met anyone who has called us The Co-operative,” Pennycook said. “We are going back to being The Co-op: we are The Co-op, we have always been The Co-op; it makes sense to talk about ourselves the way everyone else talks about us.”

He said the Group was the market leader in British retailing in the 1960s but it had “stood still, lost ground and fallen behind”.

“We were the nation’s favour way of doing business but we took it for granted. The shock of what happened made us stand back and take stock. The task now is to be different again, to be brave again, to be Co-op again.”