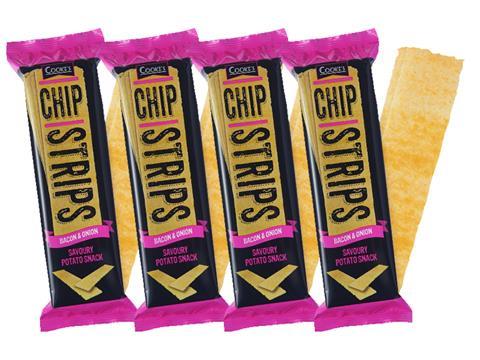 A British snack brand is set to roll out to Tesco after securing listings in over 5,000 French stores.

Chip Strips are thin rectangular potato-based snacks that are the brainchild of Warburtons veteran and chef Bryan Cooke, who set up his own business Mr Cooke’s Kitchen three years ago.

Chip Strips have made their UK debut in One Stop ahead of rolling into about 250 Tescos on 23 November, but French buyers were quicker to snap up the brand and it has already proved a hit in France where it is listed in chains including Carrefour, Cora and Franprix. The supplier employs a team of staff to manage its French business.

“We are extremely confident in the brand’s growth potential both in the UK and internationally over the next 12 months,” said Cooke, who has self-financed the business, which works with a third-party manufacturer.

“The launch of Chip Strips demonstrates courage in conviction in breaking away from established snack brands to create fresh and diverse products,” he added.

“It delivers an enhanced proposition for retailers looking to breathe new life into the category.”

Social media will be a key focus of marketing for the brand as distribution builds, but Cooke said he also plans significant advertising.