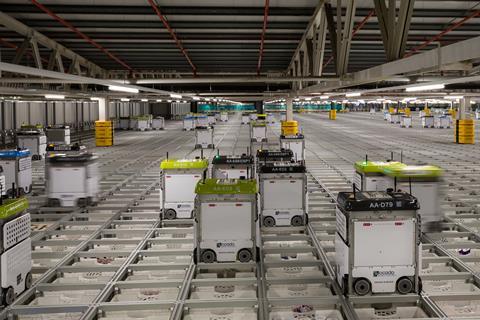 Ocado (OCDO) shares dropped 2.7% this morning to their lowest level in a month after news emerged late on Friday that the fire that devastated its Andover warehouse in February was caused by an electrical fault related to the charging of its robots.

The online grocery has seen its share price soar over the past 18 months as it has sold its technology around the world and has agreed a £1bn joint venture with M&S for its UK operations.

However, the shares have dropped 2.7% to 1,360p this morning - having fallen as low as 1,322.2p - after a circular to investors said that fire investigators had found that an electrical fault in the battery charging unit of one of its robots had caused the Andover blaze.

The circular said: “The conclusion reached is that the cause of the fire at CFC 3 was an electrical fault at one of the first-generation battery charging units at the edge of the ambient storage grid which caused the plastic lid on the top of a grocery carrying robot to catch alight.”

However, the company sought to reassure investors by saying it has “undertaken a number of remedial actions intended to eliminate the risk of such an event occurring again”, including the removal of these plastic lids, the introduction of localised smoke detectors and the adding of heat sensors.

“This lid serves no practical purpose and its removal has not impacted the efficiency of the bots in any way,” Ocado said.

Deliveries from a new temporary Andover ‘spoke’ - the name Ocado gives to the smaller warehouses that support its full-sized CFCs - began in the middle of April.

Despite this morning’s share price fall, Ocado shares remain up 145% year-on-year after a rise that has propelled the company into the FTSE 100.

Tesco (TSCO) has updated the market this morning on the impact of its adoption of IFRS 16 accounting standards on its 2018/19 financial year.

Tesco will adopt the measures for its 2019/20 financial year and will apply the new standards retrospectively as the move will have an impact on a number of reported figures.

While sales and total cash flow remain completely unaffected, the move will impact Tesco’s reported profits due to the different treatments of rent and depreciation.

However, profit before tax will fall by £152m and due to the combination of depreciation and interest being higher than the rent they replace. Tesco said this is due to the “relative immaturity of the group’s lease portfolio, with leases being around one-third expired on average”.

Net assets will also reduce by £1.3bn to £13.5bn, while total indebtedness increases by £3.3bn to £15.5bn due to the treatment of leases under the new rules.

A busier post-Easter week is headlined by Sainsbury’s (SBRY) annual results on Wednesday – and particularly what CEO Mike Coupe has to say about its collapsed merger with Asda and where the under-pressure supermarket goes from here.

There are also a number of AGMs on Wednesday and Thursday, including Nichols (NICL), Just Eat (JE), Ocado (OCDO), Kerry Group and Unilever (ULVR).

In economic news, Thursday brings the latest Bank of England interest rate decision, while this week will see the publication of the monthly PMI figures for UK construction, manufacturing and services output.

Also the latest monthly grocery market share figures from Kantar and Nielsen will be published tomorrow morning at 8am, while the monthly GFK Consumer Confidence figures will also come out on Tuesday.