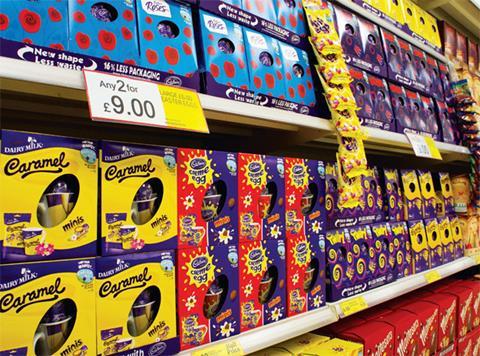 Easter is coming early this year, and retailers have responded with a marked increase in promotional activity on sweet treats during February and early March.

The total number of confectionery products on offer across the major supermarkets was up 26% year on year over the four-week period to 13 March, with Asda, Morrisons, Tesco and Waitrose all offering more deals on chocolate and sweets.

Sainsbury’s and the Co-op cut back slightly on confectionery deals compared with last year, but they both still had “a considerable amount of offers” in store at 78 and 153 respectively, according to Kay Staniland, director at Assosia.

In contrast to the major supermarkets’ wider promotional strategies, which have seen a general shift away from multibuy deals in favour of ‘save’ deals, x-for-y multibuy offers proved highly popular in confectionery, accounting for 41% of deals over the past four weeks.

When it comes to promotional locations for confectionery, the power aisle remains the top space outside the main fixture, accounting for 53% deals.

However, the foyer is becoming more popular, accounting for 10% of confectionery offers last month compared with just 1.4% in 2015 .

“Throughout 2015 there was a marked campaign by retailers to remove the guilt lanes from stores, in most cases removing completely all confectionery products,” says Staniland.

“With confectionery being a big focus at this time of year, retailers may start to relax their own rules slightly in favour of retaining footfall and sales.”