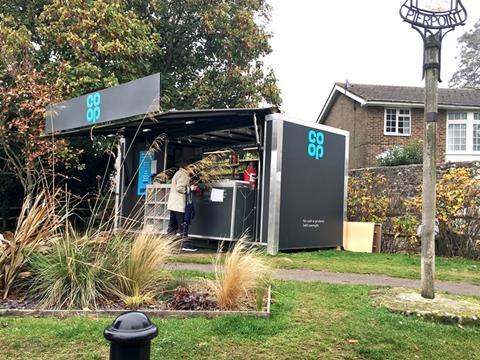 Sir, Pop-ups are now, in retailing circles, a fairly ubiquitous idea. But at times, they are perhaps an overused promotional vehicle.

Don’t get me wrong - I’m happy to accept client briefs to design pop-up stores - but, before embarking on a brief, it’s important to question whether they are always the right type in the right place at the right time.

Never have I been more convinced of the true value of the pop-up store in the right circumstances, as when the Co-op popped up on my village green recently (Hurstpierpoint, West Sussex).

The village’s permanent Co-op store suffered a fire in September 2016, so the group opened a pop-up store on the tiny village green, allowing residents to continue to buy their (slimmed down) groceries while the clean-up operation was carried out. It’s not a first - the Co-op has launched similar initiatives before in Appleby-in-Westmorland - but it was the first time I had experienced the format first hand.

I’m not sure the temporary store has helped mitigate the group’s lost sales entirely, but for me it’s about so much more than that. If there was ever a way for a retailer to demonstrate in a really practical way that they are well and truly at the heart of the local community, this is it: the pop-up is delivering continuity and reassurance to shoppers - values that a brand simply cannot buy, but instead must seek to earn. Sometimes the most effective things are borne out of necessity.