Krombacher takes the fight to Foster's with UK launch of Radler 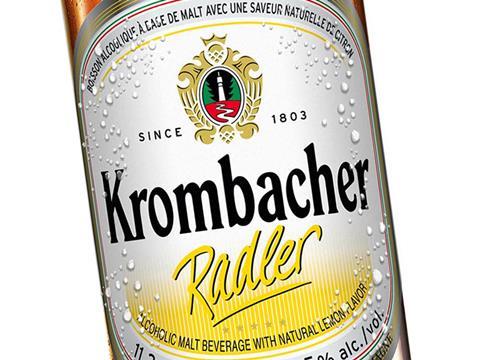 Germany’s Krombacher is eyeing a bigger slice of the UK beer market by going head to head with Foster’s and launching its own radler beer.

Krombacher Radler, which has been produced in Germany since 2002, is being launched in the UK this month by importer Morgenrot, to kickstart a raft of UK activity for the brewer.

Krombacher UK’s sales and marketing director, Stephan Kofler, told The Grocer the timing - and the style of beer - was perfect for the UK market.

“We wanted to introduce it pre-Christmas to take advantage of the increased demand for low-abv beers during the festive season and to ensure we can drive stockists early,” he said.

The 2.5% abv beer - a blend of 50% Krombacher Pils and 50% of its bespoke lemonade - is the leading radler in Germany, with a 21% share of the market, according to Morgenrot.

“With a trend for refreshing lower-abv beers, Krombacher Radler has quickly become a key player in this market segment in our key export markets,” added Kofler.

Heineken helped boost awareness of the style in the UK when it launched Foster’s Radler back in 2013, but Kofler is confident there is space for another radler. “Our marketing campaign will be focusing on increasing the awareness of the beer style and its long history within Germany.

“We are confident our radler can not only compete in the UK radler and low-abv sector, but lead. As always when introducing any beer to the UK, brand activation plus driving trial and awareness is essential.”