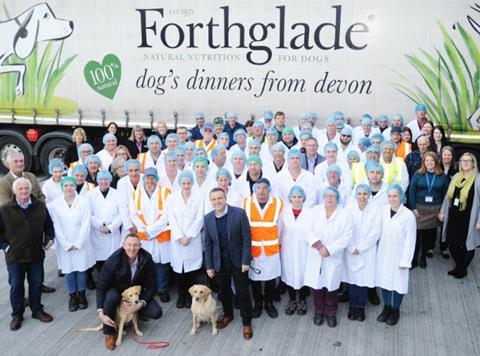 Devon dogfood brand Forthglade has opened an £8m factory near Dartmoor National Park, with the aim of doubling production of its 100% natural products.

The result of 15 months’ development, the purpose-built facility at Okehampton East Business Park is expected to produce 80 million healthy meals for dogs per year.

The 70,000 sq ft premises, which will see an extra 20 people join Forthglade’s 130-strong workforce, recycles water and uses steam from the manufacturing process to heat its offices.

The plant had been in the planning “for over five years now, so it’s fantastic to officially open it” said Gerard Lovell, Forthglade joint MD along with Chris Brooking since 2011.

“We were keen to keep the factory in Devon to retain as many of our staff as possible. In fact, we’ve kept almost 100% of them, and soon the team will be growing again as the sector of premium natural meals and treats for dogs continues to see huge growth.”

Established in 1971, Forthglade’s 100% natural dogfood is listed in Tesco, Sainsbury’s, Morrisons and Waitrose, and exports to 11 countries. Its value in UK grocery has more than doubled in the past year, reaching £3.1m [Nielsen 52 w/e 8 September 2018].