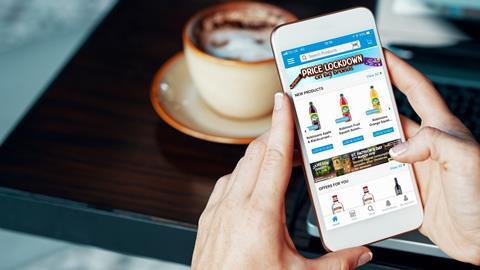 Are wholesalers failing to meet retailer demand for digital?

Wholesalers yet to fully embrace digital are missing out on important sales and failing to meet the changing needs of retailers, according to research from Him.

The Wholesale Online 2019 report shows in 2008 more than three-quarters of retailers (76%) who primarily used delivered wholesale conducted their orders over the phone, and just a quarter used online ordering. Last year 98% of those retailers were ordering online.

But it is not simply a case of setting up a transactional website, warns Him. Perhaps most significantly, the data highlighted the value of an app-based offer.

The average order value is 18% higher via app compared to a website. This is £1,336 compared to £1,132, according to the research, which analysed millions of web and app sessions at leading wholesalers over the course of a year to February.

Bestway Wholesale head of marketing and digital Salih Sheikh says the wholesaler’s digital plans have to be retailer-driven, rather than sticking to preconceived ideas around how an online platform should work.

One thing he identified was that the Bestway app had what appeared to be a high ‘bounce rate’, with retailers coming on to the site and leaving without ordering. Sheikh explains this was indicative of how retailers were using the platform: visiting frequently throughout the day during quieter periods in their stores.

“It’s not about only offering an app or a website, you need both,” he says. “Often retailers will use the app in-store before going home and completing the order on the website.”

Smartphones to supermarkets: how digital is driving the 2019 experience

The Him research shows the peak times for retailers using wholesale websites and apps are roughly similar to the busiest times of the morning. However, apps become more prevalent later in the evening, suggesting retailers are adding to their baskets on their phones when they are still out serving customers.

The findings also identify that wholesalers still have plenty of work to do to improve the functionality of their websites and apps. JW Filshill retail sales director Craig Brown calls this “reducing the friction points on the customer journey”.

Him found the search function to be by far the most common method used by retailers on websites to add products to their baskets. However, up to 14% of searches on some wholesaler websites returned no results at all.

“There is a risk that retailers are unable to find the products they need despite them being in stock and available,” adds Clifton. “Special characters like apostrophes and ampersands can cause confusion with search functions. Greater care and attention is needed to mitigate retailer searches bringing up zero results.”

When it comes to apps, the friction points can be around barcode scanners. Clifton warns wholesalers need to be vigilant in keeping information up to date.

While wholesalers are starting to really drive their digital platforms, many are still very much in their infancy. Some retailers have yet to fully get on board, with Filshill’s Brown pointing out that a small number of its retailers are still using fax, but the direction of travel is only one way. Wholesalers need to get up to speed - quickly.