Carling presents In Off The Bar football entertainment show for Sky 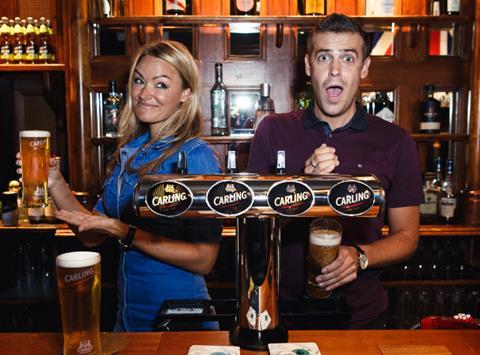 Carling, the official beer & cider of the Premier League and Sky Sports, has unveiled its own football entertainment show.

Carling In Off The Bar, the first major activation for the Molson Coors brand since it signed up as sponsor of the Premiership in May, will run alongside Sky’s new Friday Night Football programme from Friday (19 August).

It will be broadcast live from pubs across the UK, offering customers the chance to get their locals in front of ‘millions’ of viewers, while encouraging consumers watching at home to enjoy Carling beer.

The show will be split into three parts. The first two will be broadcast online via Sky’s web, digital and social channels, while the third segment will be shown on TV after Friday Night Football on Sky Sports 1.

Hosted by Soccer AM’s Adam Smith and Laura Woods, the new programme would provide fans with an entertaining look back on the week in football and alternative analysis on that evening’s game, while also being packed with “fun football challenges and celebrity guests”, said Carling brand director Jim Shearer, adding it was the first element of the brewer’s plans to support the off-trade and on-trade as part of its sponsorship.

“Sporting events can be a big money maker for retailers if they are able to harness the sense of occasion in-store and market products accordingly.”