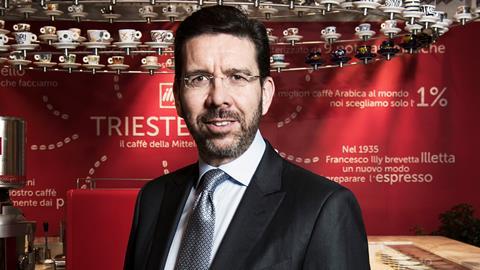 As the first ‘outsider’ to head Illycaffè, the family-owned Italian coffee business, Massimiliano Pogliani had a lot to prove.

Yet for the Nespresso veteran, who took on the top job at Illy in 2016, it was not just about the “exciting challenge” of growing the business, established in 1933, in line with its values. What really drew him to Illycaffè was the personal connection he felt with the family. After all, it was after attending a coffee-tasting course 30 years ago led by Ernesto Illy - son of Illy’s founder Francesco and father of the current chairman Andrea - that he “fell in love with the art of coffee”.

“I got a diploma from Ernesto,” he says. “It was a little bit like going to Sunday school with the Pope. It left an indelible mark, which has always inspired and guided me. Illy has been a reference point throughout my career, first working with coffee machines [at manufacturing company Saeco International] and then during my 10 years at Nespresso.”

Moving from a multinational to a smaller family business was still a big culture change for Pogliani requiring adherence to the mission and long-term vision. But after three years at the helm, the combination of the family’s entrepreneurial spirit with his managerial expertise looks to be paying off. The business ended 2018 with record sales of €483m and profits of €18.1m - 39% higher than the previous year. So, what’s the plan now? How will it grow its international presence? How will it fend off acquisitive coffee giants like Nestlé, JAB and Starbucks? And is a sale out of the question?

While exports already account for 65% of sales the recent move to take full control of its UK distribution, handled by Euro Food Brands for 25 years, is a signal of intent, says Pogliani. It’s part of a “long-term strategic decision” to grow sales in its most important markets.

“If you want to have a direct grip on the consumer and develop a brand, you have to do so directly,” he says. “Distributors are a fundamental resource for companies because you cannot be an expert in all the markets from day one. But at some point, the brand must make a choice. We chose to have a direct relationship with consumers to give a boost to our growth in the UK market.”

And while questions have been raised given the uncertainty surrounding Brexit - which he likens to Penelope’s blanket in the Odyssey (which is never finished) - whatever the end scenario, he believes Illy will be better off being directly managed.

“We either had to decide that the UK market was non-strategic and irrelevant, or we had to take back control,” he says. “The international vocation of the brand does not allow us to exclude a market like the UK from our strategic plans, so we thought it logical to take this step so that any potential negative element can be faced directly.”

But while the UK move involves investment, there are no plans to mimic the strategy of Italian coffee brand rival Lavazza. While Lavazza’s €1.87bn sales in 2018 dwarfed Illy’s, it is “riddled” with acquisitions, sub-brands and product diversification - which “for Illy would not be acceptable”, he says.

“Illy is not the greatest in terms of quantity of coffee, but if we look at the market from a qualitative aspect, we are certainly recognised as market leader,” he claims. And in contrast with Lavazza, Pogliani wants to be “synonymous with only one type of quality”.

“Our growth is organic growth. Illy does not plan to grow by acquiring other coffee brands because that would be incompatible with our philosophy.

“If we say we want to offer the best coffee in the world, how could we explain to the consumer that Illy offers more than one coffee?”

Illy’s “high-end quality” credentials and niche positioning have made it a tempting target for the giants of the coffee world. Players like JAB and Nestlé have made no secret of the fact they would like to buy Illy, but the 86-year-old business has always rebuffed their offers. “We do not want to water our offering down or be forced to make compromises,” says Pogliani.

Pets: Not for now. I am resisting but will soon give up

Best career decision: Moving back to Italy to head Illy

Worst career decision: Letting others convince me to join a sector I did not feel passionate about (banking) - it lasted a year

Business mantra: Never give up

Filter coffee - yes or no? Sometimes, during a long meditation

But wanting to remain independent does not mean Illy is “closed, and not open to collaboration”, the CEO says. “Illy is not for sale, but we are open for business.”

A case in point is a licensing deal signed by Illy and JAB last year to produce and sell Illy-branded coffee pods compatible with Nespresso machines.

“Instead of being the prey of a bigger company, we made a deal with this coffee giant,” Pogliani explains. His own decade of experience at Nespresso surely had a part to play in Illy’s decision to enter the coffee pods business, allowing the brand to tap a new, fast-growing channel.

“The results are proving us right: we’re gaining new customers fast through this joint venture.”

When it comes to attracting new customers, however, Pogliani believes the biggest opportunity is in retail, especially in the US - Illy’s second-biggest market after Italy.

Last month, the company said it would be willing to sell a minority stake (for the first time in its history) to a strategic partner to help it expand its retail network in the country. It currently operates around 180 cafés globally (17 of which are in the US) with a “clear objective” to open more. But this might take a while, as in retail “the right location is key”, Pogliani explains.

“We’ve always had a strong expansion plan, but if we fail to secure the right location we will not compromise by opening a café.”

So far Pogliani has achieved what he set out to, proving an ‘outsider’ could lead Illy to record results, but having secured his place at the helm of the business for a further three years in 2019, he says he will not “rest on his laurels”.

“When one does well, one must strive to do better,” he says. “The objective now is to consolidate our strategy, because we have done a lot of work but there is still much to do.

“The challenges continue, so my plan is never to give up, but also never to be content with what I have done. Instead, I want to keep looking ahead and raising the bar.”