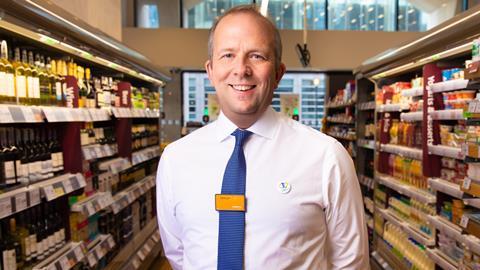 Sainsbury’s store restructure has attracted some negative publicity but its architect is clear: it’s working

Simon Roberts has more insight than most into the tough trade union talks rival Tesco will be having this week. Only a few months ago it was Roberts, as Sainsbury’s new retail and operations director, in the line of fire, as the retailer pushed through what Unite claimed was a ‘draconian sign or be sacked’ pay deal.

The guaranteed pay rate, an industry-leading £9.20 (£9.80 in London) was what “the workforce told us they wanted” says Roberts, but the simplification meant a “small minority” were left out of pocket. And, along with other structural changes, it was “a lot for staff to take on, which is why some chose to leave,” he admits. An estimated 1,700 in fact.

But 12 months on, and after some major availability woes in the early stages of implementing his store management overhaul, Roberts “couldn’t be more delighted” at the progress in the run-up to Christmas. “We knew it would take some time to stabilise operations, and some regions are ahead of others, but the overall picture is good.”

So what is the masterplan? How exactly is it working? And how will it evolve? The pay changes form part of the largest reorganisation of Sainsbury’s stores in more than a decade. Every role has changed in the past year. “We’re not just tinkering with the engine here, we’re having a look at how the whole thing works.”

In the service of others

A tall, friendly, avuncular figure, Roberts started his career on the M&S shop floor, and though he rose to become MD and president of Boots UK, it’s clear that shops - making them work, and motivating and managing shop floor staff to support customers - are his passion. Against the backdrop of a crisis-stricken high street, his aim is therefore not just to slash costs; but to run stores more efficiently and consistently, “to take out all the costs that don’t help us do a better job for customers and reinvest that in our customer offer”.

Status: married to Helen. We live in York and have four children between us

Education: planned to study engineering but got hooked on retail after taking the M&S young management trainee offer

Career: 15 years at M&S, in stores, regions and Baker Street. Joined Boots in 2003 as retail director, then COO, then MD and president of Boots UK where he led UK transformation and merger with Walgreens

Passionate about: People and customers. Leadership is about being in the service of others

Pet peeves: Inflated egos getting in the way of doing the right thing

Hero: My grandad. He taught me all I needed to know

“It’s easy to save money but hard to do it well. We could have just taken out a couple of leadership roles, but we wanted to reset the way our stores work.”

The restructure at the swish Nine Elms store at which we meet Roberts makes the point well. It’s performed exceptionally since it opened three years ago, thanks to its location in an up-and-coming neighbourhood on London’s South Bank, but like the rest of the estate, its store management team has been slashed, from 35 roles to just 14, comprising a store manager, operations manager and 12 customer trading managers. In line with that, the store itself has also been simplified: from 22 departments, there are now just five: food and trading, clothing and GM, foodservice and counters, online and customer experience.

The new structure delivers a more flexible workforce, with employees being able to work across different departments. That makes it easier to achieve customer service excellence no matter what the time of day (the store is open 100-plus hours a week). The new approach also gives managers and staff more responsibility and ownership over what they do.

“There’s no more hand-holding - our staff run families, manage budgets and follow schedules in their personal lives, and we’ve given them the capacity to get on with what we know they are capable of, which has created more consistency. Our teams can’t control the stock or sales target, but they can control how they serve shoppers.

“Take the 300 colleagues in this store. They used to come to work and be told everything they needed to do. Now we’ve liberated them to get on with what they know they need to do and put a management team in place to make that happen.”

Customer feedback backs that up. There was a 6.3% uplift in customer satisfaction across factors including staff availability, pricing, range and till speeds from September to December 2018, he says. And the old quarterly mystery shopper checks, which were used to determine staff bonuses, have been replaced with a new ‘Lettuce Know’ app, giving staff real-time daily customer feedback, which customers are prompted to provide via Nectar-driven emails as well as messages on till receipts. A new ‘Wow Service’ bonus scheme launched the same month (September). In-store teams can get an extra £50 per person for amazing customer service, and more than 15,000 of its 130,000-strong workforce have received the bonus so far, says Roberts.

“Our staff run families, manage budgets and follow schedules in their personal lives and we’ve given them the capacity to get on with what we know they are capable of”

The Lettuce Know app is one of a number of ways Roberts is putting technology front and centre of the new store strategy, in a programme called Smart Store.

A new risk app rolled out for staff a year ago, instead of the “large physical manual that staff had to read and work with. And an activity app launched in December, which enables shop floor staff and managers to see daily agendas on handsets rather than relying on bits of paper. The next phase involves ‘connected stores’ so areas like lighting and refrigeration can be controlled centrally. “We need to continue putting new technology in the hands of 130,000 employees to help them do a better job for our customers,” says Roberts.

A case in point is e-commerce. Sainsbury’s setup is quite primitive compared with the dark store operations of some rivals, but picking productivity has improved 20% in the past 18 months thanks to new handsets for pickers and drivers.

On the customer-facing front there’s the ongoing trial of checkout-free shopping in its Clapham North store. An updated scan & go version of its Smartshop mobile self-service app follows Amazon’s lead in enabling payment to be automatically taken from the customer’s Apple Pay account as they walk out. Isn’t he worried about increased store theft? “There’s a lot of work for us to do around shrinkage,” he agrees. “It’s a significant problem, more than it was even three or four years ago, because of the sheer number of self-service tills.”

Tackling it will require technology, insight and analytics. “You can’t just try harder to stop people stealing, you have to put measures in place to make stores less susceptible. So we’re increasingly using technology to find out when it’s most likely to happen at our stores.”

Attracting the right talent to the shop floor is crucial to tackling crime too, though. “Great customer service is a way to prevent theft,” he believes, especially following the managerial changes as staff feel more accountable across the store. Indeed the flexibility that the managerial changes have afforded has “enabled us to bring in talent that hasn’t just spent its time in one part of a retail business, but several. There’s plenty of talent in retail and we’ve seen a lot of leaders join us from other businesses and bring their hospitality or clothing experience with them.” He even welcomes applications from staff made redundant following the CVA at Patisserie Valerie.

In short, Roberts isn’t afraid of change, and for all the carnage on the high street, and all the job cuts, believes people are not disposable assets but a crucial part of the solution - if used in the right way.

And if the Christmas trading figures were a little disappointing (up 0.4%), it’s not because of the store restructure. “We’re a year into the managerial changes, so there’s still plenty to do, and of course we’re looking to improve trading over the next year, but managers unequivocally tell me they have better teams than they did this time last year - they’re more flexible, energised, customer-focused and consistent.”