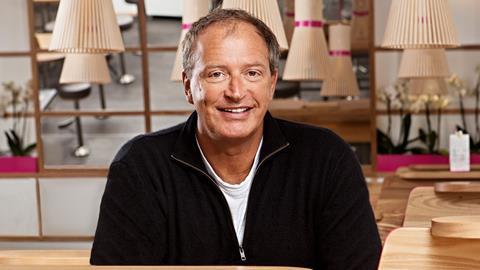 He’s a home-grown entrepreneur with a passion for Asian food. Now Itsu founder Julian Metcalfe is setting his sights on taking the brand global

”Sometimes I wish I were Asian,” declares Julian Metcalfe. True to his word, the boardroom of Itsu’s Holborn HQ is decked out with an array of sushi, gyoza, bao buns and crispy seaweed thins. Metcalfe’s passion for food is palpable.

He leaps up at several points to fetch a tray of bao buns or a new flavour of rice cracker from the end of the table. “Look how beautiful they are,” he says, opening a pack of seaweed thins. “They’re very, very nutritious, very high in vitamins. If you lived in Korea, these would be quite normal, but in this country, no one had ever seen them before.”

That Itsu has now developed seaweed thins for children - they launched into grocery in September - shows just how much UK consumer tastes have developed. “We dreamt of doing children’s seaweed thins years ago,” says Metcalfe. After five years of development, the range is now available in Waitrose, Whole Foods Market and Ocado.

The key to success is adapting Asian staples for the western market, Metcalfe believes. Bao buns “can’t be weird and smelly” and must be free of MSG. Gyoza should contain familiar ingredients such as kale and spinach rather than “weird things like kimchi”. “It takes months and months and months to develop these sorts of products,” he explains.

It may seem at odds with Britain’s apparent appetite for authenticity, but there’s no doubting Metcalfe’s expertise in consumer tastes. After all, that has been the foundation of his entrepreneurial career. He was just 26 when he founded Pret a Manger with college friend Sinclair Beecham in 1986. That was followed by the formation of Itsu in 1997, and snack brand Metcalfe’s Food Company in 2010.

At one point, he had all three businesses on the go. Today, he is spread less thinly. He sold a €500m stake in Pret to Bridgepoint in 2008, and in 2016 sold Metcalfe’s Skinny to Kettle Foods because “everyone was piling into popcorn”. Which leaves Itsu and Itsu Grocery - the product arm of the brand - as his sole focus.

That allows Metcalfe to be pretty hands-on. He sits in Itsu’s two-hour development meeting, made up of eight people across the business, every Wednesday. Although he will participate when needed, he is careful not to dominate proceedings. “I’ll only speak when they cannot make a decision,” he says. To “sit there for the full two-hour meeting and say nothing” is the ultimate dream. “That’s when I know I can go home and not come back,” he jokes.

And he’s comfortable delegating pretty important decisions. He gives the example of this year’s Christmas gyoza. The turkey, stuffing and cranberry were initially coloured a bright beetroot red, which looked “all wrong”. NPD manager Katherine Austin (one of The Grocer’s 2019 Top New Talent winners) is in charge of sorting out a less garish colour in time for the festive season. “That’s probably half a million pounds of gyoza on one person’s trust,” he says. “I haven’t seen it yet. I’m a bit scared.”

Worst career decision: To have waited so long

Business idol: They change from day to day

Business mantra: If it’s worth doing, do it properly

Best piece of advice given or received: Hire people better than you

Way ahead of our time

If it fails it won’t be the first time. Metcalfe admits “we’ve launched quite a number of [lines] that didn’t work”. The launch of dessert gyoza last September was one. “We spent a year developing them with our partner in Korea,” he says. “We spent a fortune. But you couldn’t give them away.

“It was a good example of us getting carried away because we thought they were great, but unfortunately we were way ahead of our time. We’re going to relaunch them in two years when the market’s ready.”

Still, as Itsu’s results indicate, it doesn’t miss the mark often. The grocery business is a case in point. It turned over £12.4m in 2018, up nearly 40%. Next year, Metcalfe expects it to bring in between £20m and £25m, making it responsible for just under 25% of Itsu’s overall £116.5m sales. But still, Metcalfe insists, “it could be bigger”. “You only need a few customers to go wild for a product and it takes off.”

Metcalfe is determined for Itsu Grocery to keep innovating. Crucially, it has an advantage most brands don’t. The restaurants act as a test bed for new products - selling them for roughly six months before they’re released into supermarkets. “Not many companies are able to do that,” says Metcalfe. “The testing process is fascinating.” He goes so far as to say Itsu Grocery could “never have existed without having a customer like Itsu”.

That collaborative approach only goes so far, though. The two arms of the business exist as separate entities, and Metcalfe believes that structure is vital. “The sustainability and sourcing department of Itsu is flat out looking after Itsu,” he explains. “They buy lots of things, from salad, to salmon, to tuna, and if I said to them ‘you need to develop a better bao’, they wouldn’t know where to begin because they’re so busy - and they don’t speak Korean.”

Having found a formula that works in the UK market, Metcalfe is focusing on his next challenge: global expansion. The US was the starting point. Metcalfe had an advantage here, having gained experience and contacts from launching Pret in New York. Itsu established its first branch in the city last June. After a year of testing, he claims, “it’s nearly perfect”. That branch will act as a template for further openings in the location.

“It’s important we get the store spot-on before we open another one,” he stresses. “It’s not about numbers, it’s about is it right?”

Now, Metcalfe is setting his sights on building Itsu’s presence in other countries. “We’re opening two shops in France in April,” he says. In the future, he is even open to taking on the Asian market. “Maybe one day we’ll open in China.”

Metcalfe is similarly ambitious for the grocery business. Itsu Grocery has a limited presence in some small shops in Sweden, Norway, Finland and Belgium. “But we’re not properly in the big places yet,” says Metcalfe. “What we really want to do is get our grocery offering out across Europe. We only need to get one or two big accounts and we’re off. We’ve just got to get in there.”

That could prove even harder than establishing a store footprint overseas. “It’s terribly difficult, the grocery business,” he admits. “You have to be really good, you have to offer better value for money and better products than all your competitors put together.

“You have to never stop trying to enthral your customer. You have to make food that when you open it and taste it you can’t believe it’s only £2.99, which, unfortunately, is a challenge.

“To create stuff which is really remarkable is very difficult. But we have a great team. If you hire talented, smart people, it’s incredible what you can do.”

Even get children to eat seaweed, it turns out.