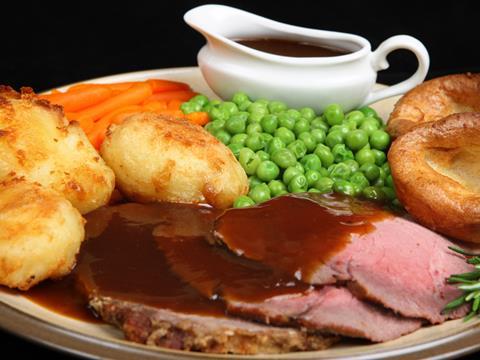 Roast dinners are changing. The Grocer’s recent category report revealed a fall in meat consumption and a rise in the variety of side dishes. And we eat them midweek now!

Now a new Asda survey suggests a rise in fast and loose interpretations of what is an acceptable part of a roast. Some 22% of respondents add mushy peas, while 10% include baked beans. A further 10% lob in a pickled onion or two.

Other random horrors include the swapping out of roast meat for sausages and exchanging parsnips for chips. A fifth of these maniacs then slather their meals in ketchup - the culinary equivalent of painting graffiti on the rubble of a building you’ve just burned down.

At what point do these monstrosities stop being defined as roast dinners, and start their own sub-category of ‘nasty random calamities’? Asda shoppers need our help (except the pickled onion ones - they’re doomed).