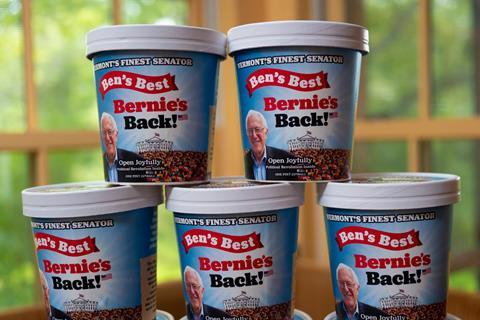 Bernie’s Back: ice cream fit for a presidential candidate

In the US, the Democrats are a long way from deciding which candidate they are to put up against Donald Trump in the 2020 election – some 24 hopefuls remain.

Ice cream brand Ben & Jerry’s is backing socialist Bernie Sanders in the only way it knows how: with a special limited-edition tub. ‘Bernie’s Back’ is a hot cinnamon flavour – which symbolises Sanders’ holding politicians’ feet to the fire, apparently. What a tasty image!

The ice cream also has a butter toffee ‘backbone’ running through it (see what they did there?). And if that hasn’t sucked enough of the fun out of it for you, a chocolate disc on top ‘represents all the wealth that has risen to the top 1%’. Yay!

The online-only ‘treat’ is being marketed not under the usual B&J brand, but as ‘Ben’s Best’ – Ben Cohen being Bernie’s campaign co-chair. We don’t know if Jerry has other plans, but one imagines Donald Trump is looking into his own flavour (white nationalist chocolate?) as a matter of urgency.