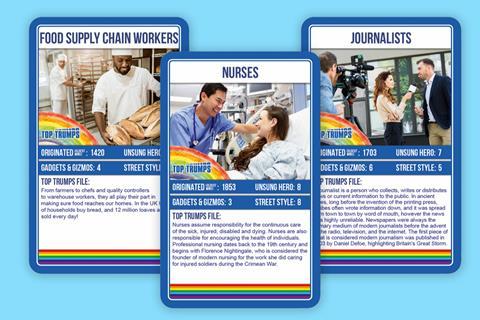 On the cards: some of the key workers in the new game

Think of playground favourite Top Trumps, and you normally imagine battles over fast cars or dinosaurs. But never let it be said that the makers of the card game don’t move with the times.

Last week it launched two new packs – Key Workers, detailing ‘Britain at its best’ – and Hospitals. As fascinating as the latter deck is (Manchester Royal Infirmary was opened in 1752, fact fans), it’s the former that concerns us, featuring as it does – alongside cards honouring doctors, nurses and teachers – food supply chain workers.

Quite right, too. Granted a high ‘unsung hero’ status of nine (suggesting they’re rather underappreciated), four for ‘gadgets and gizmos’ and six for ‘street style’, the card gives a special mention to farmers, chefs, quality controllers and warehouse workers. A pic of some hunky bakers makes it a card anyone would be proud to play.

We’re pretty pleased journalists made the cut, too. Though perhaps less so that we’re deemed worse dressers than practically everyone else in the game.