Foodie Leonardo da Vinci still tasty after all these years 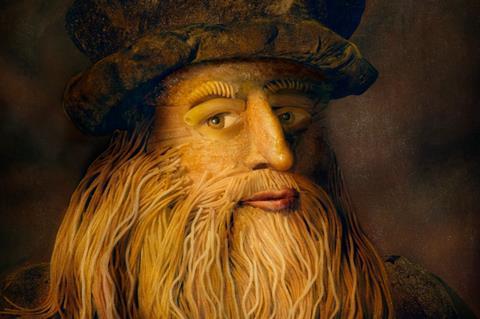 Leonardo da Vinci died 500 years ago last month. To mark the occasion, Germaine Greer slagged off his art at the Hay Festival.

A more friendly form of recognition came from Italian food chain Bella Italia, which commissioned a special version of one of his self-portraits, made entirely from Italian foodstuffs. Da Vinci is here shown with a bread hat, mozzarella & olive eyes, a chicken wing nose and parma ham lips. His eyebrows, face and beard are made from different types of pasta. It took food artist Carl Warner and his crew 20 hours to design and make – so don’t order one if you’ve got theatre tickets.

The chain – which was coincidentally launching its new menu – wanted to pay tribute to the beardy polymath’s underappreciated foodie credentials. As well as painting the Mona Lisa and conceptualising the helicopter, Leo apparently also came up with an automated machine to spit-roast meat – oh, and he invented spaghetti.