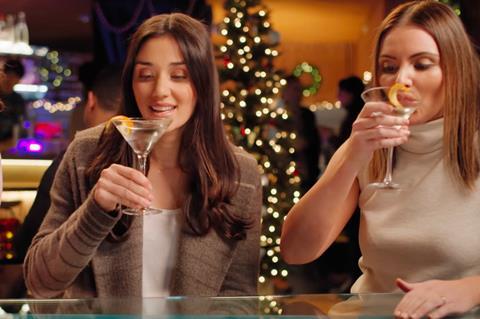 Aviatrix: Peloton Wife (l) drowns her sorrows with a pal

It unveiled a Christmas ad in which a man buys his (already slim) wife a Peloton exercise bike – plus app, which allows access to live and recorded spin classes, music, competitive leaderboards and more performance stats than you can shake a stick at.

The ad shows the couple watching a video diary of her torturous year of exercise, which ends with her proclaiming grateful thanks to hubby. Social media critics savaged it as “sexist” and “dystopian”, even comparing it with tech-nightmare TV show Black Mirror.

But it’s not all bad news. Quick-thinking gin brand Aviation quickly found the actor who plays ‘Peloton Wife’, Monica Ruiz, and cast her in an ad of its own. She’s shown staring into space as she drinks a Martini with two supportive pals. One tells her “you’re safe here” before they toast “to new beginnings”. Our heroine downs her drink as one of her chums notes “you look great by the way”.

Aviation’s owner, Hollywood actor Ryan Reynolds, tweeted the ad with the caption “Exercise bike not included”. That’s one way to feel the burn!