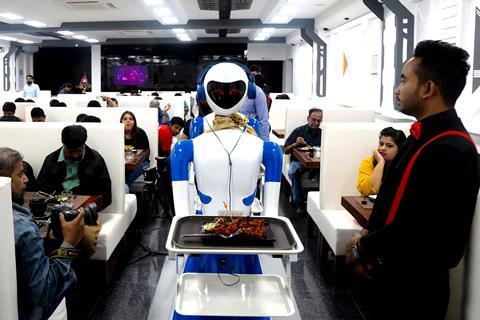 A robot serves up a ‘byte’ to eat. Geddit? Oh, never mind

A year ago, Bogof brought you news of Transformers-style robots being employed as waiters in Thailand.

It seems the trend is spreading – though, admittedly, quite slowly. At imaginatively named eaterie Robot, in Bangalore, India, a fleet of six robot servers glide unnervingly between tables, guided by sensors positioned on the floor.

Diners can place orders via tablet devices, meaning the only interaction they need to have with actual people comes when the restaurant’s surviving human staff awkwardly decant plates from the robots’ trays to the table. Who knows what will become of them once the bots figure out how to do that – but we can rest assured that their not-in-any-way sinister red ‘eyes’ and cute scarves will provide an adorable distraction.

Somewhat creepily, the restaurant bots are apparently designed to be ‘feminine’, with diners invited to give them names. Don’t get cheeky, though – using facial recognition technology, they can ‘remember’ customers.

We’re all going to die.