My Week… by Sir Terry Leahy (as told to Bill Tush) 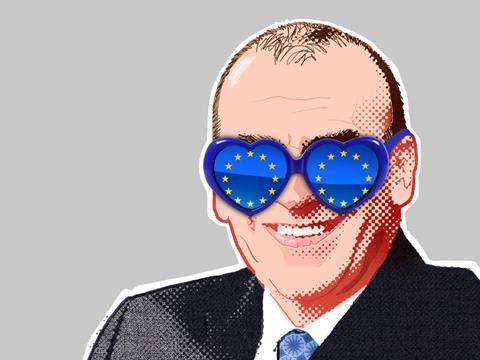 Hi, I’m Terry. But you will call me Sir Terence. Some of you will remember me from when Tesco was a good company. That’s back when I used to run it. I don’t run it any more. Back then, sales were growing and we were respected all across the globe, except for the parts that Phil Clarke used to creatively run. Which was, admittedly, most of it.

Anyway, by pointing this out I’m demonstrating that you should do as I say, like they used to very quickly when I used to run Tesco. Before it was bad. Recently I teamed up with some of the former (and rather lesser) leaders of UK retail to write to the raving readership of the Daily Mail explaining why they must vote to remain in Europe.

The Belgian guy with the bad hair, Sir Ian Cheshire, ‘Not Sir’ Justin King and, most importantly, Sir I, Terry Leahy, movingly pointed out that “Britain is a world-class country”. While it’s not clear what a non-world-class country looks like, it’s the type of thing that the puce-faced, illiterate angries on the Brexit side like to have read to them.

We then went into some more sophisticated arguments surrounding how we know best and unless we stop the Brexiteers’ plan to flood the Channel Tunnel with the flecks of spittle spurting from IDS’s mouth every time he hisses the word “Brusssselssss,” the French will sulk and we will no longer be able to buy garlic or hirondelle.

Justin, whose tiny crayons we borrowed to write the letter, pointed out that we would be accused of scaremongering, since this is essentially the only long word the Leave campaign can spell. So we robustly dismissed this by saying we were “not scaremongering,” and gave Justin a lolly.

I used to run Tesco, you know.