Pat anticipates a Christmas of long hours and thin margins 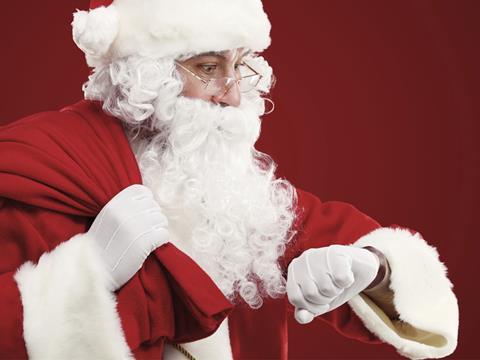 There’s not much on my Christmas list these days. In years gone by there was always the prospect of some Yardley bath salts or KP Cheese Footballs (o/s since 1978) to brighten up The Day Itself, but as the years have passed by I’ve had to lower my expectations. Secret Santa was also a bit of a disappointment this year. I don’t know what possessed Pavlina to give me a deep fried mince pie. Perhaps it was because that’s what she got from me. Happily we managed to sell them both on in the shop, where they’re selling like… now what WAS that expression again?

Still, in the spirit of goodwill I’ve been having a little think about what some of my competitors might get if I were that bearded jolly red chap who works with all those silly elves. Mr Corbyn, that’s his name.

Well, I think Mr Coupe might like some market share. It must be awfully galling being right all the time about what’s best for your customers only for them not to understand that. And I’m sure Mr Potts would like a bit of mojo, as he seems to have lost that. Mr Burnley already had his main present when he was given Asda after all that time, though I’m not at all sure he’ll like it when he finally unwraps it. Mr Lewis will get a Booker token (always a disappointment), while Mr Barnes and Mr Härtnagel are fighting it out as to who will play Mr Grinch in the end of term panto, stealing Christmas from the big four.

Just joking, of course, readers. This Christmas, everyone will get what they always get from your Pat and everyone else in this trade: long hours, good products and margins thinner than an After Eight (£2.49 for 300g). Let’s hope we can do it all again next year. Merry Christmas!