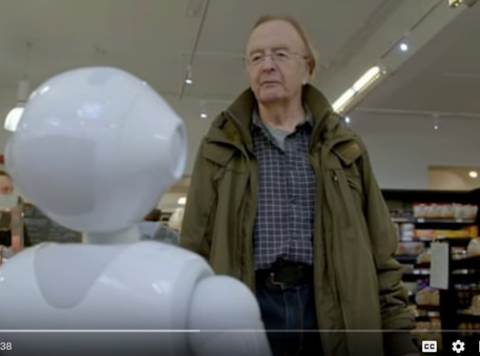 Fabio, the UK’s first ’Shopbot’, lasted just one week in the role

In the future, we will doubtless be enslaved by sentient robots, whose only use for us will be as Never Let Me Go-style bionic donor organ bags.

But before that happens, there’s likely to be a final golden hour in which the robots work for us. And the good news for readers in 2018 is that it’s not upon us quite yet.

The UK’s first ‘shopbot’, a friendly-looking droid named Fabio, has been sacked after just one week as a shop assistant at Margiotta’s Edinburgh store. Fabio, who had (somewhat riskily) been programmed to greet customers with a ‘hello gorgeous’ and offer hugs, was given the boot for accidentally patronising shoppers. ‘Cheese is in the fridge’, he would say, rather unhelpfully.

Perhaps surprisingly, human staff were sad to see Fabio go, with one reportedly bursting into tears at his decommissioning. Perhaps he will be merciful when the machines rise again.