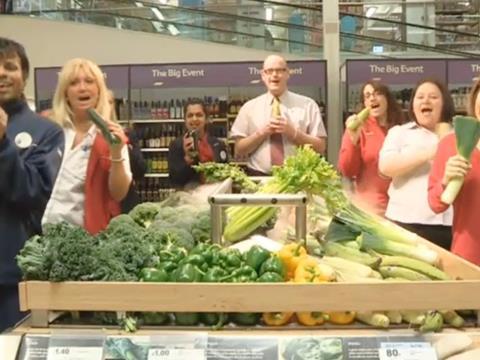 Low-budget ITV1 show Let Me Entertain You this week featured a startling appearance from the staff of Tesco’s Purley store.

The programme premieres performances from groups of “ordinary people”, who lip-sync to a song before viewers vote on which deserves a £200 prize.

Staff gamely gurned their way through John Newman’s Love Me Again, singing into veg, bunches of flowers and till scanners. Everyone got involved - from store manager Richard Frear giving his corpsing deputy a hammy ‘telling-off’, to the fishmongers, cheerfully monkeying around with the produce.

The vid also cleverly worked in some shots of the store’s immaculate deli, fresh display and fancy mist dispensers.

And it seems to be working! As Bogof went to press, the video was narrowly outscoring a mildly saucy entry from a team of nightclub workers in Widnes. Nice job!