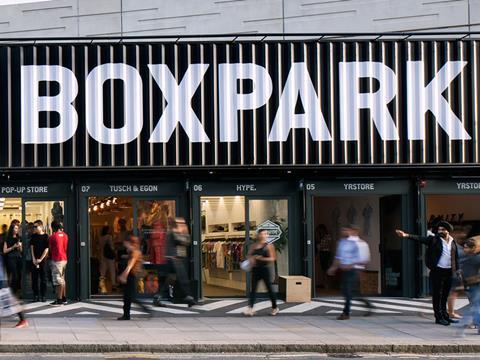 There has never been a better time to be in street food. The market is booming up and down the UK and Roger Wade, CEO of BoxPark, believes there is plenty more to come.

“There is a casual dining revolution happening and we are taking it to the next level,” he says. So how does he plan to do that?

Wade launched the first BoxPark in Shoreditch in 2011 to rave reviews. Essentially it’s a pop-up shopping mall made out of shipping containers that houses a mix of retailers.

However, all the units in the Croydon project, set to open in summer 2016, will sell food and drink. “We are combining casual dining under one roof and also creating a central piazza,” he says.

“What we are doing now is as big an evolution as the first BoxPark was. I’d be lying to you if I said everything worked at Shoreditch. It didn’t. So we have looked at similar projects in the US and Europe, taking elements from everywhere, and we are bringing through the entertainment side of things as well.”

Wade says there will be over 250 events a year to create a buzz while visitors pick up food from “greengrocers, butchers and bakers, as well as street food, and little delis. It’s not just about cafés, it’s about food culture. There are other schemes that have elements of food and drink, like Spitalfields and Borough Market, but we are 100% purpose-built to trade food and drink for 52 weeks of the year.”

Croydon BoxPark will be situated next to the bustling East Croydon Station. “If Croydon was a city it would be the eighth-largest in the UK,” he says. “Over 500,000 people a week use that station and we are literally adjoining it. And 85,000 people use the tram every week and 30,000 people walk past us every day. So it has large potential footfall.”

Wade is unashamedly planning to “positively discriminate” in favour of independent food retailers to fill the 70 individual units, although he says that as some will require larger premises than others, the eventual number of tenants will settle around the 30 mark.

“Some can take up to 1,800 sq ft, half a dozen might take 1,500 sq ft, but the majority will range from 150 sq ft up to 900 sq ft,” he says. And “by far” the majority of retailers will be “small, tiny, independent retailers. Yes, there will be bigger retailers as well, but we will positively discriminate towards independents because they bring a different food offering.”

The lean towards smaller retailers is reflected in the cost and flexible nature of leasing a unit, he adds.

“Currently, rent for one 300 sq ft unit for 12 months is being quoted at £20k. But for longer leases, or if tenants take more that one unit, we will look at it on a case-by-case basis. The big advantages are you can take smaller units than at a major retail development like Westfield, and have real flexibility of leasing. You can have anything from 12 months upwards, whereas in a traditional development you are looking at a five-year minimum.”

And the focus on food and drink is now the “future template” for BoxPark. Wade wants to open at least a dozen at home and abroad.

“We are trying to push the boundaries, to break the mould,” he adds. “It’s not just about selling food and drink, it’s way beyond that. We want to create a truly inspiring customer experience.”