After Brexit, it is imperative we stay in the single market 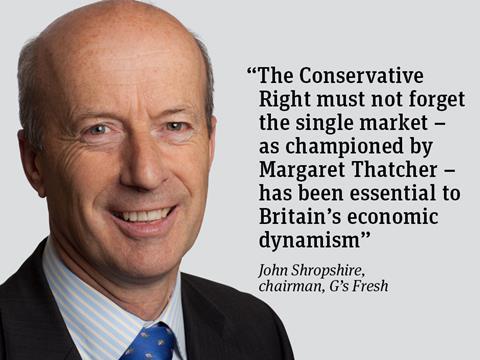 As the leader of a company with a bright history on the Continent, and a supporter of the Remain campaign, I am saddened by the vote to leave the European Union. G’s Fresh is as much a European business as it is a British one, and its success is testament to the liberal and co-operative environment fostered by the EU and its single market.

We employ 5,000 people across Europe, turn over £400m annually and produce 10 million units of fresh produce per week for British consumers. With farms in Britain, Spain, Poland, the Czech Republic, and in Senegal, our operations require cross-border supply chains, the free movement of goods, capital, and labour, and the harmonisation of standards to provide British consumers with the highest quality, and best value produce possible. It would be reckless, and dangerous, for Britain to throw away these gains, which have taken years to achieve.

The single market has allowed our harvest machinery to be used throughout the whole Continent, without modification, border checks and mountains of paper work. Our produce can be sold to consumers across the whole Continent, thanks to the harmonisation of standards throughout Europe. These innovations, and Europe’s excellent motorway networks, keep our produce fresh without the need for air freight.

The Conservative Right must not forget the single market, as championed by Margaret Thatcher, has been essential to Britain’s economic dynamism, European prosperity in general, and the rehabilitation of former Soviet states in the 21st century. In the interests of stability and Europe’s economic recovery, Britain must remain a member of the single market, and continue to trade freely and cordially with its European partners.

Those in the farming industry excited by a weaker pound boosting exports and farmgate prices wilfully ignore a fundamental macroeconomic reality. The UK is, and will continue to be, an importer of food, and of the products and materials required by the food industry. The need for a strong, stable currency is paramount in an import-based, consumer economy such as the UK’s.

However, throughout the Remain campaign I consistently stated that G’s will always play upon the pitch it finds itself. In some respects, our business will, potentially, perform better being outside the EU. If tariffs are imposed, for example, we may be able to put up prices as any extra complexity in the supply chain makes the expertise and services we can offer potentially more valuable. The efficiency and competition that the single market brought Europe has been a bonanza for consumers but it has driven down prices for our company. My support for the single market is not borne out of self-interest, but a concern for the greater economic good of the UK and Europe.

The Brexit campaign neglected to dwell on the opportunities and benefits provided to British businesses by the single market. The dominance of corporations - like JCB and Dyson - with factories across Asia and South America overshadowed the British family businesses that have invested in the single market. Businesses like ours were underrepresented in this campaign, and must now be heard.

It is imperative Britain stays in the single market, to ensure Britain retains the substantially reduced supply chain costs that have continuously cut the retail price of healthy fresh produce over the past 30 years, to the huge benefits of shoppers and the economy as a whole.