Prioritising British food in public procurement is an idea the BPC has been trying to get traction on for a while now, so to hear it talked about by Michael Gove and others, on the fringe of the Conservative Conference, was wonderful acknowledgement. British food in public procurement is where our government can declare its commitment to British produce and producers, and give confidence that can inspire the industry. Food produced by British growers and manufacturers should not only be actively prioritised for public services, it should be celebrated. 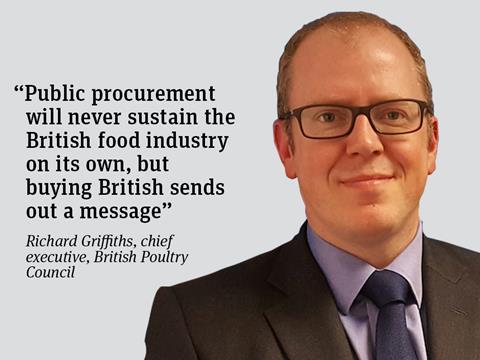 Politicians talk about our post-Brexit ability to set our own world-class standards, so it must be unpardonable for government to do other than buy food from those in this country who invest in meeting those standards. Although public procurement only accounts for 5.5% of UK foodservice sales, what it represents is much more valuable. Public procurement feeds those in schools, hospitals, and the armed forces. The quality of food in these services directly affects people’s health and wellbeing.

Many public organisations and institutions up and down the country already strive to buy local, to buy British, because they recognise that the communities they serve deserve to know where their food comes from, and that it is safe, wholesome, and nutritious. The next vital step is for the government to promote British food unashamedly, and give public procurers the support to source it as their first choice.

The poultry meat sector has never had or sought subsidies, and has grown in a competitive marketplace. Nearly one billion birds reared for food every year, and half the meat that the country eats, British poultry meat is a national success story that means knowing where our food comes from, and it means standards all can trust. But British food must also be affordable.

To deliver a successful Brexit we are focused on increasing productivity and innovation through upskilling our workforce and embracing new technology. A country of origin is not in itself a guarantee of quality, and inferior products from one place should not have preferential treatment over higher quality ones from another. So British food must have the edge for the value it adds to the nation and our rural economies. Our animal welfare policies are world-leading, alongside high standards in food safety and employment practices. All that remains to do is for government to declare British food is preferred over all others, so we are calling on government to review public procurement guidelines to help public services prioritise British food.

Public procurement will never sustain the British food industry on its own, but buying British sends out a message; not only to our producers, retailers, and consumers, but also to other nations, that we believe in and back our standards, our food, and our businesses. Brexit is giving us an opportunity to redefine our Britishness, it should allow us to say boldly that our first choice is British, and the benefits that brings; in jobs, the economy, and in our communities.

Richard Griffiths is chief executive of the British Poultry Council