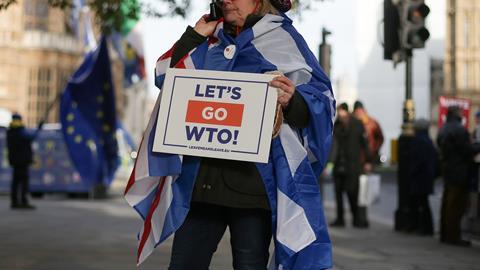 World Trade Organization rules are the answer to our prayers – or so some pro-Brexit campaigners say. But what are the likely consequences?

Let’s go WTO’ screamed placards brandished by pro-Brexit campaigners at a rally to mark what should have been Brexit day last Friday. They may well yet get their way. Despite a bill passing on Wednesday night (3 April) instructing Theresa May to seek an extension to Article 50, a no-deal exit, or ‘going WTO’, is still the default option if MPs cannot find another way forward. So what exactly would that mean for UK food and drink?

The World Trade Organization is a global forum where 164 governments negotiate trade liberalisation rules and solve trade disputes. Members commit to a set of principles - or WTO terms - which provide the “basic floor for world trade”, says a report by UK in a Changing Europe, a thinktank funded by the Economic and Social Research Council and based at King’s College London.

However, their “inadequacies” mean no other major trading nation relies on them entirely for trade. “Although many trade barriers have been lowered through the WTO, all countries seek even less friction,” the report adds.

Even the US, which doesn’t have a free trade agreement with the EU, has around 100 side agreements to make ­trading easier, such as ­provisions on customs facilitation.

In the event of a no-deal, or ‘WTO exit’, the UK wouldn’t have any of those agreements in place with the EU. So UK exporters would face the same tariff and non-tariff barriers as other third countries with whom the EU does not have a free trade agreement in place.

“That’s the result of the application of the WTO’s Most Favoured Nation (MFN) principle, which says you treat all states equally unless you have a special trading relationship with them,” says Professor Catherine Barnard, report author and senior fellow for UK in a Changing Europe.

The UK would also lose the benefit of free trade agreements it now has with countries such as South Korea and Canada as a member of the EU.

The agri-food sector is particularly at risk. According to the FDF, 94% of the UK’s food and drink exports currently go either to the EU or to countries with which the EU has negotiated an FTA.

And the EU - which is the UK’s single biggest agri-food trading partner - has notoriously high tariffs for food and drink. “Average EU MFN tariffs for goods are quite low at around 4%,” says Barnard. “But tariffs on agri-food products are really significant. That will make UK agriculture uncompetitive in the EU.”

Average EU MFN tariffs on dairy are 54%, on sugar 31% and on cereals 22%. For lamb - one of the UK agriculture sectors identified as the most vulnerable to a no-deal Brexit - they can be as high as 71%.

“That will have a dramatic impact on the sheep sector,” says BMPA director Nick Allen.

Some proponents of a no-deal or ‘WTO rules’ Brexit have argued the UK could ­simply rely on the provisions under Article XXIV of the General Agreement on Tariffs and Trade to continue tariff-free trade with the EU for a 10-year period. But trade minister Liam Fox has dismissed that claim on the basis it would require EU agreement and “be based on the expectation of a future trade agreement or customs union” to be operable in WTO law.

“In the political atmosphere of no-deal, it would be difficult to cultivate the good will necessary for that to proceed,” he told MPs in January.

Fox has also admitted the government won’t be able to roll over the 40 trade agreements with over 70 non-EU countries that the UK currently participates in as a member of the EU.

In fact, the Department for International Trade has secured just nine of 40 ‘continuity bilateral trade agreements’. But “with the Canada deal pending, the rollover of deals will reach 70% by value of the UK trade they currently cover”, say trade experts at Briefings for Brexit.

While the “decline” in UK-EU bilateral trade volumes could cost around £10.6bn to the economy, the freedom to strike new trade deals with countries could be worth £30bn to the UK, they claim - though Barnard points out the ‘gravity model’ of “doing the most trade with those that are closest to you” applies “acutely” to agri-food.

Under WTO rules, the UK would be free to set its own MFN tariff levels. To avoid price rises on UK food and drink imports - 97% of which currently come from the EU or countries with an FTA with the EU - the government has committed to temporarily slashing most tariffs to zero. This is a “welcome shift toward free trade” says Matthew Lesh, head of research at thinktank the Adam Smith Institute, who argues “tariffs are a tax on British consumers that make food more expensive and industry less efficient, pushing down wages”.

However, environment secretary Michael Gove has admitted the UK’s tariff plan might be illegal under WTO rules. Because the provision to remove all tariffs on imports to Northern Ireland from the Republic of Ireland - an attempt to avoid a hard border on the island - would break the MFN principle. “Other countries could challenge us in the WTO,” he told MPs last week.

The UK might have a case for arguing the move was on the grounds of national security, an important exemption under WTO rules, suggests Barnard.

And Gove hinted the government might just risk it on the basis that any objections to the tariff plan from fellow WTO members would take some time to move through the institution’s dispute resolution system. “We’d hope that by that time we’d find a trading solution with the EU,” he said.

With the WTO’s appellate body currently in crisis, he’s got a point, says Barnard. However, “given we are trying to become a major player in global trade it doesn’t look great that we are already breaching WTO rules”.

It’s a similar story for the UK’s schedule of ‘WTO commitments’, which should technically be approved by the other 163 WTO members before Brexit. Progress has been delayed after 20 countries objected to the UK/EU plan for splitting TRQs - leading WTO director-general Roberto Azevêdo to warn it was “not-realistic” to believe the UK would be ready to trade under ‘WTO rules’ before Brexit.

If the UK fails to have its WTO schedules certified ahead of Brexit it will still be able to use them as a basis to start trading. But it would leave the UK in uncharted territory, and risk causing tension with future trading partners before negotiations have even begun.

The World Trade Organization might be held up as the answer to Britain’s post-Brexit prayers, but it is facing its own crisis at the moment.

The US, which has been involved in a barrage of disputes due to its recent trade policies, has blocked the appointment of new judges to the WTO’s appellate body - which resolves disputes between members - since last year. There are now just three judges left on the appellate body, where there should be seven. And with two of those three remaining judges set to retire at the end of this year, some fear the US will declare the appellate body of the WTO non-functional in December 2019.

Faced with the loss of a credible dispute settlement system, “the rule of law will dissipate and the WTO will die a slow death”, former deputy director general of the WTO Anwarul Hoda has warned.