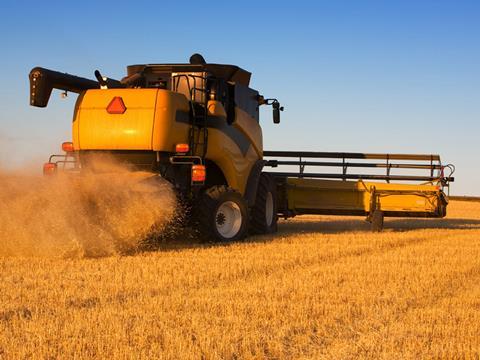 As the UK wheat harvest kicks into gear, the outlook is for a bumper crop. But how much will be of good enough quality for the food industry depends on the weather in the coming weeks.

In 2013, plantings were hampered by the hard winter, but this year the conditions were more favourable and the latest HGCA forecast indicates that the total wheat area will be 22% higher than last year at 1.96 million hectares.

So far this year, the UK crop has received the right balance of rain and sunshine to ensure good growth. Apart from Spain, which hasn’t seen enough rain, it is a similar picture across Europe and the US crop is also looking in good shape.

In the UK, harvesting could start in some areas as early as this weekend. It is expected to bring in between 15.5 million and 16 million tonnes, compared with 12 million last year, but how much is suitable for milling will depend on the weather during harvesting.

“There is still the question of what the quality will be and you never really know until the harvest is in,” says Nabim director general Alex Waugh. “If there are heavy storms that can be damaging and very wet and warm weather can cause sprouting, which hampers quality.”

Barring a disaster, the UK is widely expected to become a net exporter of wheat for the first time in two years. UK exports have fallen well short of one million tonnes in the past two years, according to Defra estimates, compared with more than three million tonnes in a good year.