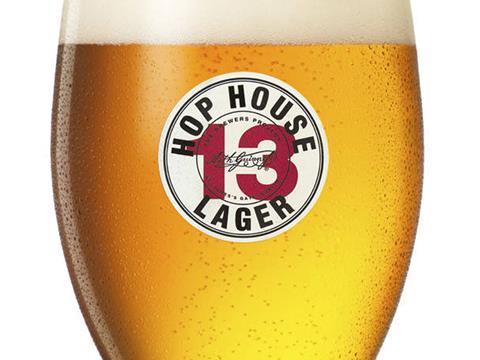 Diageo is extending the Guinness brand with the launch of the first lager from The Brewers Project.

Hop House 13 Lager is the fourth beer to come out of the experimental brewery, following Dublin Porter and West Indies Porter last September, and Guinness Golden Ale in April. It is available now through wholesale channels (rsp: £1.79/330ml) as well as on draught in the on-trade.

The beer, which has an abv of 5%, is made with Galaxy and Topaz hops from Australia and Mosaic hops from the US, and is named after an early 1900s hop store building at Dublin’s St James’s Gate that is still in use.

“I personally enjoy more flavoursome beers, so I wanted to make a lager with lots of character and flavour,” said Guinness brewer Peter Simpson, who led the development. “After some months of exploring different recipes and collaborating with other brewers at St James’s Gate, we created Hop House 13.”

“The new lager is set to inspire consumers to broaden their beer repertoires and ultimately drive incremental sales into the category,” he added.

The product was positioned to succeed, suggested Mintel drinks analyst Chris Wisson. “The word ‘Hop’ in the title should catch the eye of the many drinkers who prefer hoppy beers and associate these with high quality,” he said, adding research had shown two in five beer drinkers were open to craft-style products from large brewers.

“The beers look credible, the executions are aesthetically pleasing and I’ve little doubt the products are good,” he added. “My concern is that, although in the short term these beers will generate interest and probably success, they feel almost promotional.

“If Diageo wants to build a serious Guinness portfolio then they need a vision that helps them transition from just a stout… Arthur Guinness’s signature alone won’t hack it, I’m afraid.”