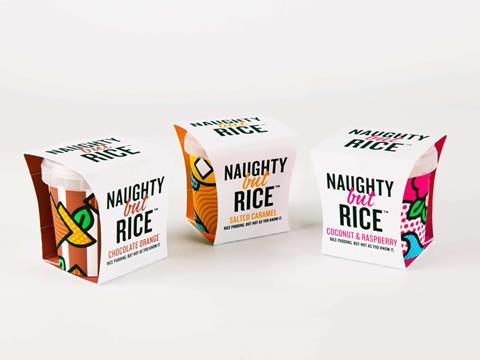 Rolling out now, Naughty but Rice comprises three flavours of chilled pudding in 140g tubs - Coconut & Raspberry, Chocolate Orange and Salted Caramel (rsp: £1). They can be eaten straight from the fridge or warmed in a microwave.

Naughty but Rice has been developed for the UK market after the business looked at trends elsewhere in the world, including the US, CEO Jeremy Hudson told The Grocer this week.

“It tastes wonderfully indulgent, and the packaging is very different to anything already on shelf,” he said. “The product delivery won’t let consumers down and we are confident of repeat sales.”

Hudson added that he believed the puds offered a more indulgent treat than other chilled rice-based desserts. They are rolling out now to retailers including Asda and Booths and will be going into Sainsbury’s later this month. They are initially being sold on the traditional dessert fixture, but Hudson said he hoped they would be merchandised with mainstream pot desserts in future.

“I believe they can and will become an important part of the fixture,” he added.