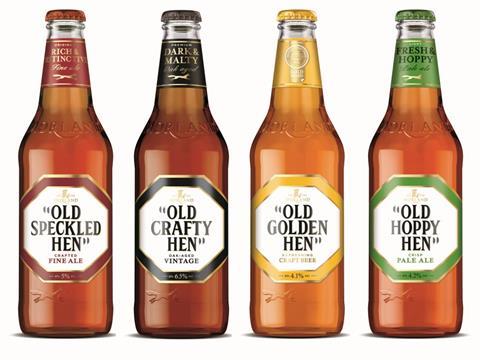 Greene King is rolling out a fresh look for its Old Speckled Hen family of beers.

With sales of £44.3m – a rise of 15.5% on the previous year [Nielsen 52 w/e 11 October 2014] – Old Speckled Hen is the number three ale or stout in the UK, behind John Smith’s Extra Smooth and Guinness Draught. Both Old Golden Hen and Old Crafty Hen are enjoying strong growth and sit within the top 30 sellers.

“With the Old Speckled Hen family going from strength to strength in the UK, the time has come to capitalise on its position in the British beer market and take it to a new generation of drinkers,” said Dom South, marketing director for the brand.

“This change will ensure we retain the loyalty of consumers who have made Hen their number one ale while attracting younger beer enthusiasts with a refreshing contemporary design and clearer beer descriptions. It was important we evolved to stay relevant in what has become an incredibly competitive marketplace.”