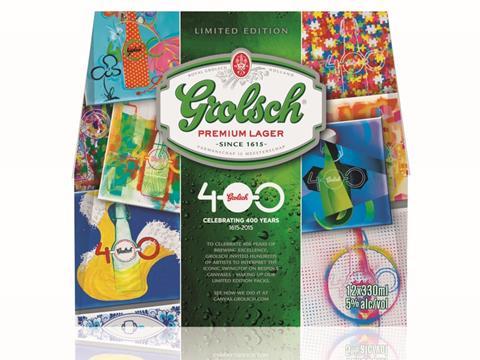 Molson Coors is marking the 400th anniversary of Grolsch with a £2.7m UK media campaign.

The push, called Celebrating 400 Years of Originality, will see 400 artists from around the world create artworks inspired by Grolsch’s distinctive swing-top bottle. The works will be revealed online on 11 May 2015 – the brand’s official birthday – and appear on a range of limited-edition packs, as well as across outdoor, digital and social activity.

The UK will also host an experiential tour kicking off in London on 10 March and visiting seven other cities. The event will allow members of the public to create their own original portrait, using a range of visual effects, which can then be printed out and shared on social media. Hundreds of these portraits will also feature on a billboard at London Waterloo station, coming together to form the image of a Grolsch bottle.

“Grolsch is renowned for its individuality and this is something we wanted to pay tribute to during the 400th year anniversary,” said Molson Coors UK’s brand director portfolio Ali Pickering. “We pride ourselves on our ability to offer beer drinkers a premium choice, whilst maintaining a unique and imaginative edge – whether that is through our distinctive beer or our unique Swingtop bottle.”