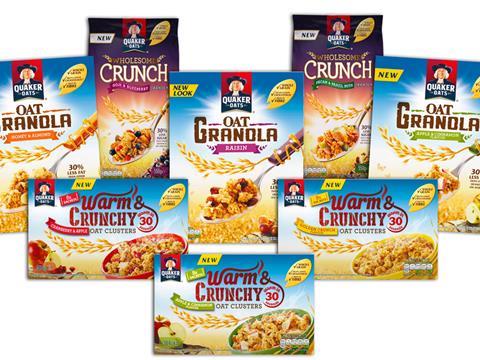 Quaker Oats is launching a major push into the booming granola market.

The PepsiCo-owned brand currently has a single granola product in its line-up but from next week will begin rolling out three new ranges, each offering different formats. The launches come as overall granola sales are up about 20% by value and volume in a breakfast cereals market down 6.3% by value and 3.5% by volume [IRI 52 w/e 25 April 2015].

The new ranges, which will be backed with TV advertising and in-store activity, are:

The ranges were aimed particularly at families that bought cereals but did not eat granola.

Quaker sales slowed in 2014 after seven years of strong growth, partly as a result of increased competition in the porridge category, with value down 1.4% [Nielsen 52 w/e 3 January 2015].

McKay said Quaker’s porridge range continued to be enjoyed by consumers, adding “we believe it is the right time to bring the things people love about Quaker to an exciting new segment”.